Acclaimed Australian artist, born Daxton Paul James Monaghan, and better known as Daxton has released his 9 track album entitled “In Verses”.  This album, is great from beginning to...

Acclaimed Australian artist, born Daxton Paul James Monaghan, and better known as Daxton has released his 9 track album entitled “In Verses”.  This album, is great from beginning to end, proving that Daxton is one of the few rock acts that not only makes great songs, but great albums. Music fans will immediately notice the mature sound of the band musically, from the loud chords of the opening song “I Don’t Mind” – with layered guitars, great lyrics, and a strong hook, this song sets an epic tone for the entire recording. The lyrics are powerful and the sound is immersive…which is important when an album is trying to draw you into the journey it’s about to take you on. Daxton is one of those artists you can just sit and listen to for hours… without getting distracted. He just captures the listener’s attention. 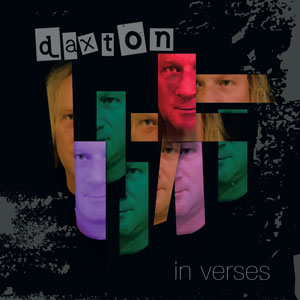 Showcasing high-decibel guitar strums and even some psychedelic distortion Daxton isn’t afraid to test the waters, which explains the seriousness of the tracks like “Power and the Glory” and “Water Goes Dry”. The album plays like a movie, shifting between roaring electric rock arrangements and then settling into euphoric, inventive mid-tempo acoustic-driven escapades.

Unlike most albums where the middle and the back of the disc fades into mediocrity, Daxton breaks new ground and keeps anticipation aloft with the freewheeling “Sanctuary” and the anthemic crunch of “Ten Thousand Miles”.

Decorated with a dogfighting guitar, killer drum execution and one muscular vocal, this latter track turns up the fire on the album, before Daxton settles into a bluesy motif on “Ball & Chain”. No doubt Daxton knows how to weave a jam that rocks with words that have meaning, but he also know how to conjure up a hooky groove that sit comfortably on mainstream radio, which is what happens with “Stain”.

The quality of the guitar work is meshed with great vocal depth and an audio balance that propels the music forward in a warm blanket of luscious sound on “Water Lines”.  Some artists are incapable of harmonizing the different layers of a song, allowing the music to turn into a jumbled mess of noise as a result.

Something that could have easily happened to this track with its swirling acoustic guitars and falsetto vocals. Daxton is not that type of a musician. He is more than capable of weaving together multiple musical parts into a beautiful, harmonious whole.

With hardly a selection that feels like conventional album filler, Daxton culls out an accomplished project with “In Verses”. This is the type of album that endears itself to you more and more as you listen to it. The songs, masterfully crafted as they are, reveal themselves to the listener over time.

Each song is layered perfectly. The vocals soar and the melodies hit you in the perfect spot every time. It’s addicting, grown-up alt-rock music with haunting, irresistible sounds. Play it twice and you’ll be humming tunes all day!

Bud Collins Trio: “No 5uch Th1ng” delivers both the quaint and the grandiose