This is Omega’s heart and soul in a five minute song. You can tell the amount of time, care and skill that went into crafting “Lil j”. The emcee’s...

This is Omega’s heart and soul in a five minute song. You can tell the amount of time, care and skill that went into crafting “Lil j”. The emcee’s choice of theme, range of emotions and lyrics power a deep journey into the mind of the man behind the mic. I wish more rap was like this, as it is an experience that entrances like a blockbuster movie would. The excellence in this song can be attributed to many things, but really most of the credit belongs to Omega himself. He is emotional, serious, and blunt. The production is excellent, refraining from beating the pop-infused bush in favor of a more indie, experimental rock model.

“Lil j” utilizes a very singular beat that is not clouded and muffled together. I am surprised at how amazing it sounds compared to other modern rap recordings which also favor heavy instrumentation. This makes itself really obvious here, as “Lil j” relies on what sounds like a dynamic and organic soundscape filled with squealing guitars, as well as dreamier soft tones, while Omega unleashes lyrical fire and fury for the song’s duration. 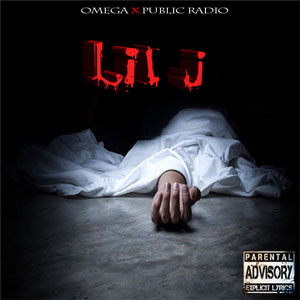 Throughout this song Omega truly lives up to his potential as he raps over an oscillating arrangement that gets increasingly complex as it blossoms into a guitar-fueled alternative rant. What this track does is ensure that Omega will be remembered for his ability to focus all his abilities to create a sound that is all his own.

Granted, with the stunning instrumentation and production that the artist has chosen here, there’s a whole lot to work with. But you need to have a razor sharp flow and focused wordplay to ride the momentum and make an impression.

It’s obvious that on “Lil j”, Omega sacrifices radio attention for compelling, cohesive, and real music. He starts with powerful lyrics. He loses himself in the music. It’s deep, brooding, and sincere. His vivid rhymes capture an epic adventure of hustling and ambition.

The combination of the uplifting musical hooks and Omega’s inspiring verses is powerful. It’s an anthem for the underworld and the replay value on this song is immense. Your mind will get lost with the mesmerizing production and the focused bars that capture the essences of someone fighting their way to the top for all the wrong reasons, and suffering the consequences of those choices.

The cornerstone of hip-hop and rap music, always has been, and always will be storytelling. “Lil j” is an enthralling account of hopelessness, despite all the riches and grandeur. Omega does an amazing job of painting a picture of how quick things can turn bad in the hood.

The art of storytelling is an elusive skill for many rappers today, so I’m always grateful when I come across an artist like Omega – who by the way, consistently refers to himself as a lyricist and never a rapper. This makes a whole lot more sense once you’ve listened to “Lil j”.

Bone Nest pushes the envelope on many tracks