Mid-60s British psychedelic rock group the Yardbirds never established a signature style, in part because of crazy management changes; in part because they changed lead guitarists over the years...

Mid-60s British psychedelic rock group the Yardbirds never established a signature style, in part because of crazy management changes; in part because they changed lead guitarists over the years – though they had some of the most amazing ones, including Eric Clapton, Jeff Beck and Jimmy Page; and in part because founder and lead singer Keith Relf was wildly inconsistent in his performances and not at all well-suited to all the styles he tried. The Yardbirds were actually far better than early Rolling Stones or Small Faces, for example, and Clapton and Beck were key reasons. But keep in mind that Graham Gouldman wrote some of their best hits. Critics have recognized an Eastern-sounding, minor chord melancholy to the Gouldman tunes, but I suggest they listen to some Eastern European/Jewish music for a better understanding of what’s really going on. Gouldman grew up in a fairly traditional Jewish family in the north of England, with strong East European roots, and that’s where his soul was coming from. 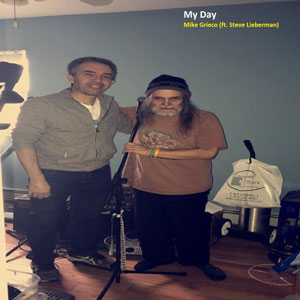 Grex has just recently released his first single “My Day” with some help from the terminally ill Lieberman on bass, flutes and backing vocals. The track was recorded at Grieco’s house while Steve was on hospice care. The result is a song that opens the window on probably the best era of music to come along since the mid 1700’s and early 1800’s. The time of Mozart, Beethoven, Chopin, and Shubert.

On “My Day”, Grex mixes rock, alternative and psychedelic sources all swirling around in one grand mix to create a uniquely raw stew. Dirty, crunchy guitars riffs, a melodic vocal chant and some nice retro flair from Grieco, sits atop Steve’s wicked bass and flute escapades.

Like the Yardbirds, way back then, you never know what Grex and Steve Lieberman are aiming to be in 2018, but they’re full of messy rock n’ roll delight all the way. They are more than the sum of their two parts, which is what makes them inimitably themselves.

On their first opportunity to record an album, The Yardbirds were not given unlimited studio-time; on the contrary; the album had to be recorded in less than 2 weeks. By the same token, one could say that Steve Lieberman too, has limited studio, except he doesn’t even know how much. Which is what always makes his performances all the more impressive.

Though short-lived, The Yardbirds legend and influence loom large, and rightfully so- the band was the starting point for three ultimate British guitar heroes: Jeff Beck, Eric Clapton, and Jimmy Page. I don’t know for sure where Grex, and above all, Steve Lieberman are heading musically, but those who grew up listening to the Yardbirds and experienced how ahead of their time they really were, will certainly get a nostalgic kick up the pants on listening to a song like “My Day” in 2018.

My music teacher hated the Yardbirds even more than he hated the Animals or the Who. That’s why I first loved them. That’s why I love Steve Lieberman, and that’s probably why I’ll love Grex. They go against the grain.

Valeska Rautenberg: “All Is Forgotten” – a thing of sublime splendor

“Death & Taxes” allows BILLER to pack in the energy, sound and charisma