T-Dubble: “Back to the Hood” ft. Supaman steps outside the box

T-Dubble has been a rising force in the hip-hop underground community for over 10 years. Growing up in Killeen, TX he began producing and composing music at a young...

T-Dubble has been a rising force in the hip-hop underground community for over 10 years. Growing up in Killeen, TX he began producing and composing music at a young age. Performing in venues throughout the southern US region. T-Dubble’s lyrical content is strongly influenced by Texas and real life situations. To date, He’s released 4 solo mix tapes, and “Back to the Hood” ft. Supaman, is his latest single release. In an effort to win the battle against those naysayers who continue to claim the south doesn’t have any lyricists, T-Dubble brings his Texas game to the masses with his brand new single. You might think this is going be another track full of wood grain gripping, candy paint dripping, purple drank, glassy rims, platinum grills and being trill. You would be wrong, this southern emcee can step outside the box while keeping his swagger.

Lyrical prowess aside, T-Dubble has a few other things going for him. Much like many of his coregionals, he has a penchant for writing great hooks that will run back and forth through your head. The track also provides a great combination of a bass-thumping beat with poignant punch lines and lethal lyrics, displaying T-Dubble’s wide range of musical abilities. 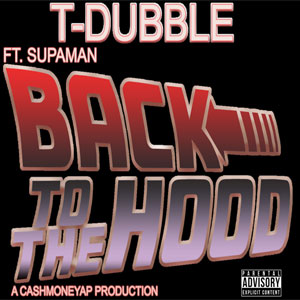 Not to mention the melodic chorus line which is beautifully crooned. This track is an undeniable banger in every aspect. What immediately draws you into the emcee’s world is his distinct and crystal clear voice. His rhyme scheme too, is particularly effortless, which makes for an easy listen.

Behind the catchy hook, well timed rhyme patterns and distinctive auto-tune twang, T-Dubble goes where not many rappers venture. Ultimately this is love song, with a fairly respectable attitude towards the ladies. Regardless of the ‘bitch’ talk, “Back to the Hood” is a far cry from the usual misogynist themes we’ve become accustomed to.

T-Dubble seems to have developed a broader view of romantic relationships because he takes a careful, nuanced approach, with a slightly nostalgic twist. While he embraces the culture, T-Dubble is out to show a different side of Texas emcees. His flow is real nice and he’s got a good voice for it.

If you thought southern emcees were only concerned with flaunting materialistic objects, T-Dubble is here to show you concentrated attention towards lyrics, creativity and substance. And as such he destroys the misconception of a Texas rapper, and you’ll love it.