Is Royal Ruckus one of the most important underground hip-hop groups currently around? Well, if you believe that the rise of hip-hop is the most significant musical development in...

Is Royal Ruckus one of the most important underground hip-hop groups currently around? Well, if you believe that the rise of hip-hop is the most significant musical development in a quarter century, what other conclusion can you draw? Though they are not responsible for the birth of the genre, riding the mainstream charts or winning self-righteous and pompous industry awards, the Bakersfield collective represents the genre’s second coming of age. The acid-tongued rhymes, the throwback beats and scratching, the hipster style, and the postmodern rap attitude – Royal Ruckus is introducing it all, at time when mumble rap and trap are in world domination mode. They want to help set hip hop on its ear and kick open the doors for the new old school, and third generation of rap to take shape, seeing as the second generation is currently a total sellout to the commercial machine. 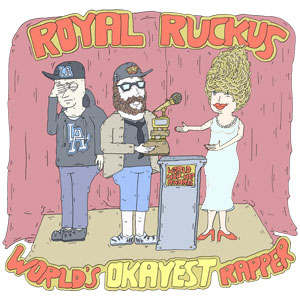 Royal Ruckus originally hails from Bakersfield, California, and has been making fun, conscious hip-hop for two decades. They returned last year with “The Summer of the Cicadas” double album, and now front-man Chunjay proposes a collaborative project with CookBook from LA Symphony.

Their latest “World’s Okayest Rapper EP” is a vivid reminder of rap’s alternative attitudes and styles: their queries are forceful but not angry; the lyrics are critically cutting but never purposefully degrading or derogatory: the beats are simple but rich and exciting; the overall effect is edgy and combative, but not violent or destructive.

But most of all, it’s damn good fun, as Royal Ruckus take a satiric look at a series relatable topics – poking fun at the middle class, scrutinizing a white rapper in a highly competitive game, and describing dating anecdotes. But they can also be reflective and serious, as they show on “Postcards from the Road”– a song written to loved ones while traveling the United States on tour.

An anthemic-rhyme lyrical assault, launches “World’s Okayest Rapper”, a tongue-in-cheek look at your average white rapper with the ambition of rocking the mic and wearing the crown. What sets the song apart, is its brass-filled instrumentation and Chunjay’s “white rapper” delivery.

“The Ghosts of Women Past” sees the narrator suffer a serious of failed relationships and “rebuilding brick by brick” as he warns about the mess he made of events while trying desperately to find a wife: “don’t be a douche, but don’t rush to put a ring.”

“Take the Leap” (feat. Shizaru) sees Royal Ruckus’ Chunjay cement himself in a duet with Shizaru, which lyrically has all the potential of being the logical antithesis or perhaps the unavoidable consequence of the track that preceded it.

“This White Life” is exactly what the title says, as it pokes fun at the white middle class. This is probably as good as the Beastie Boys would have sounded like today.

Royal Ruckus describes “Multi-Purpose Room 2”, which features guest vocals from Eligh of Living Legends, Pigeon John, MC RedCloud, Malcolm Smalls, and Shizaru as the most fun track on the album. This song as a whole has no weak spots, filled from top to bottom with the genre-shaping, air-tight rhymes which are thrown around between the features.

“I Love You (and You and You and You and You)”, again tackles the interpersonal charades some of us bounce between, in trying find ‘rewarding’ relationships.  The “World’s Okayest Rapper EP” is a top quality listen, managing to incorporate a strong fun characteristic whilst maintaining a high standard of musical and lyrical integrity, and should not be excluded from any rap music collection.

The Band of the Hawk: “BOHUP Vol.2” flexes its lyrical prowess