Rapper Avenue Ten, originally from Saginaw, MI, left his hometown at the age of 19 to pursue music and further his career. His latest release is the single “Pocket...

Rapper Avenue Ten, originally from Saginaw, MI, left his hometown at the age of 19 to pursue music and further his career. His latest release is the single “Pocket Change” produced by ZoSmuve.  Is this a hustler’s song, or a club song? Could it be both? Either way this will have you motivated to stay on your grind no matter what. There’s a genuine emotional sentiment displayed, while the swagger is powerful without falling prey to blasé boasts. It’s an impressive blend of being melodic and decidedly in-your-face. Avenue Ten spits over a superb backdrop, including standard, hard-hitting trap percussion, synths, but most surprisingly, a rich piano in the bridge too. The rapper does his job by serving up biting rhymes to match the excellent production work, while his flow is top-notch.  Avenue Ten keeps things simple, but despite the simplicity, the track’s hypnotic nature is undeniable. In fact when everything clicks into place, the results are irresistible.

In the 21st Century fans have come to expect a certain level of showmanship and emotional commitment from rappers. Avenue Ten’s voice and tone delivers this in buckets, without even attempting to, or ever becoming overbearing. Whether his slightly sneering or fully smiling, his delivery is always in the pocket and he keeps the forward momentum going from bar one. 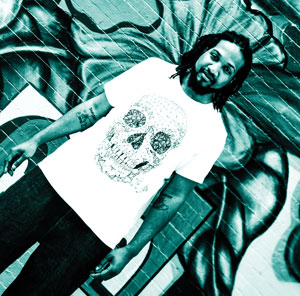 What one expects from a project like this is an undeniable, attention-hogging banger that begs to be blasted at stoplights.  What you don’t expect but get delivered along with the package is nuance, lyrical acrobatics and a broad palette of flows.

Fans need to be motivated by heat. And on that count, Avenue Ten lives up to the hype. Hence he will grab everyone’s attention with “Pocket Change” (Prod. by ZoSmuve). He captivates us with his lyrics, straying away from the typical rap agenda while still maintaining his credibility and swag.

He makes something everyone can relate to, grabbing the attention of a broader audience and giving everyone a sound to ride to. Furthermore the record is lush, filled with rich keys and a fat bass, thanks to ZoSmuve – a soundtrack creator capable of evoking feelings of suspense and intrigue the way a film scorer does.

Whether you are blasting his music in the parking lot, on the way to a house party, or even at the club, ZoSmuve always delivers a beat to remember. “Pocket Change” is specifically meant to be played in the club or in the car at an extremely high volume.

Capped off by typically high caliber verses, “Pocket Change” is a no brainer when it comes to hitting the repeat button. Which proves that if you grind hard enough and having some get up and go about yourself, then you could achieve a sound and vibe like this one. The infectious moments of vibrancy, creativity and honesty that Avenue Ten creates on “Pocket Change” keeps the versatile rapper right at the center of the track.

PayJayJay: “Made in Savage World” comes from another dimension!