The Silver Bayonets: “Inside The Jar” – a towering masterpiece

One song drawing a considerable amount of attention to The Silver Bayonets’ recently released album “BraveFace”, is the epic track “Inside The Jar”.  The song is based on the...

One song drawing a considerable amount of attention to The Silver Bayonets’ recently released album “BraveFace”, is the epic track “Inside The Jar”.  The song is based on the Sylvia Plath semi-autobiographical novel “The Bell Jar”, and her daughter Frieda Hughes’ scathing poem “My Mother”. “The Bell Jar” is a novel which tells the story of a depressed young woman named Esther Greenwood, and contains many details from Plath’s own life and struggle with mental illness. Originally published under the pseudonym “Victoria Lucas,” it was released under Plath’s name for the first time in 1967. The novel is widely seen as one of Plath’s darker works since she committed suicide a month after its 1963 release. The main themes of “The Bell Jar” concentrate on mental illness, identity, sexual liberation, freedom, and confinement. Esther describes the depression she experiences as a bell jar from which she cannot escape. 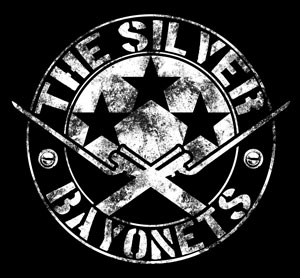 The Silver Bayonets encapsulate and interpret Esther’s hopeless description  perfectly on  “Inside The Jar”: “You need advice but there is none / No-one knows what’s to be done / It’s best to think the worst is over / Best not to hope in case worse is to come.”

The track finds the London-based indie-rock band in top form as they manipulate this gloomy theme. These are dark times after all and The Silver Bayonets seem to have thoughtfully tapped into this aspect of the human condition. The heightened level of detail and care of the group’s work here shows their love of music as a truly expressive art form.

“Inside The Jar” is a statement that clearly says: “This is what music is like when a band has talent, passion and imagination, as well as an inquisitive conscience”. This song represents a towering masterpiece in the The Silver Bayonets’ catalog, from whichever angle you look at it.

What’s on offer on this mid-tempo rock ballad is a very true testament to how incredibly in command The Silver Bayonets are with their instruments, how tight they are as a band, and what an imaginative songwriter and beautiful singer Kabir Sheikh is.

Drifting from a simple atmospheric guitar opening, to a melodic lush verse-chorus structure, and then morphing into a truly thundering instrumental section before lapsing back to the chorus and then fading, is absolutely breathtaking. Nearly every superlative that can be uttered about a recording, can be uttered about “Inside The Jar”.

If you haven’t heard The Silver Bayonets yet – then now’s the time to jump on the bandwagon -if there’s any justice Kabir Sheikh and the lads are on the verge of great things. Overall, this is one of the few newer indie rock groups that really grab me by the balls and squeeze so hard that I cannot ignore them!

Jimmy Carter of the XXXIX Empire – “Jimmy” is Genius!