Although 24-bit audio is now the standard procedure on most DAWs, there’s been a growing legion of music producers who have had remarkable success with 8-bit music. Whilst this...

Although 24-bit audio is now the standard procedure on most DAWs, there’s been a growing legion of music producers who have had remarkable success with 8-bit music. Whilst this seemingly simple music had its origins in the early days of video gaming, it’s rapidly become featured in modern dancefloor hits. 8-bit or chiptune music first became commonplace in the 1980s where the soundchips in early gaming systems allowed programmers to make primitive, but highly catchy soundtracks to iconic titles on the Commodore 64 and Nintendo Gameboy devices. Whilst improvements in computer hardware meant that 8-bit music fell out of favor during the 1990s, a few nostalgic producers couldn’t resist seeing how chiptune music would work on the dancefloor.  Anton Cullen, known as Ansonix, is an 8-bit inspired electronic dance music producer hailing from Dublin, Ireland. He has been active as a keyboardist alongside many talented groups, as well as producing his own instrumental piano compositions. His unique blend of electronic dance music echo’s 8bit/chiptune, rock, and blues influences, going for powerful beats and lush melodies. 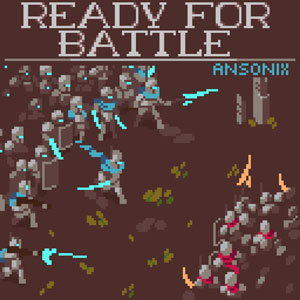 Recently Ansonix dropped his latest 5 track EP “Ready For Battle”, which is themed around a long and epic war between the armored Knights Of Light and the Armies Of The Darkness. Everything you hear on the EP is recorded and performed live on keyboards and controllers, rather than just programmed into a DAW.

This phenomenal recording finds the songs merging into one fascinating presentation of cutting-edge performance art. The opening track “The Story Begins” is an intriguing one with a bright, melodic, nostalgic sound that immediately appealed to me, and will do much the same with you. The synths resonate in thick layers while the drums hit hard and clear.

There was something immediately authentic about the earnest chiptune sounds, created by a combination of driving instrumentation and thumping percussion. I had high expectations for this record but Ansonix blew them away. I was expecting video vintage gaming bleeps and chirps, but I was met by full on, thoroughly arranged songs with well-developed melodies and a gamut of EDM twists and turns.

By the time you press play on “Fully Armoured”, it is already clear that at the heart of Ansonix’s art is his compositional mastery and his peerless proficiency in manipulating what was once considered an old, obsolete sound to its maximum modern effect. 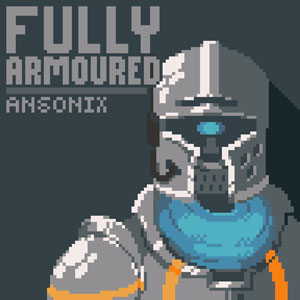 As Ansonix tumbles into the bass driven “Engage”, he shows how he masters the hardware and his skill, infusing the music with heart, afforded through a conceptual vision that few artists possess. What really makes the EP so special is just how well it works as both an entire, continuous listening experience, and as a collection of songs.

Ansonix is honing and perfecting his craft – doing what his done before, only better. This is most obvious on highlights like the dynamic and growling “Battleground”, one of the most driving and outright thrilling songs I have ever heard Anton perform.

“Triumphant” feels like the summation of everything Ansonix has been trying to accomplish up to this point on the EP. The mid-tempo effortlessly propels the song, but there’s plenty of variety and innovation to be found here.

It leads into the stunning melody Ansonix infuses into the arrangement, making this the most beautiful song on the EP. “Ready For Battle” reveals itself to be one huge, vibrant, sonic adventure. It provides the kind of melodic and rhythmic escapism that many will be looking for.

The EP’s unrelenting aural vibes are compelling, and the rush of endorphins which it produces can’t really be argued with. For those unfamiliar with 8-bit and chiptune music, Ansonix is bringing his version of this underground art to a whole new level.

Light Grey: “Bubblegum” is both epic and rocking!