Ben Green is on a run with new single – “No Regrets”

Emerging from Venice, CA, at only 19-years of age, the aspiring Rap/Hip Hop and R&B recording artist, Ben Green is on a run. Since dropping his debut single, “Change...

Emerging from Venice, CA, at only 19-years of age, the aspiring Rap/Hip Hop and R&B recording artist, Ben Green is on a run. Since dropping his debut single, “Change Up”, a couple of months ago, the prolific songwriter is now on his third single release with the track, “No Regrets”, which is the follow up to, “High Notes”. Clearly this is a young man on a mission, with a focused vision on where he is heading. It’s even clear in song lyrics on the latest song: “Live every day like it is my last one / They ask what car I want I said a fast one / Spent the rest my bands on some fashion / Cause when I’m gone there will be nothing left to spend it on.”

Ben knows what he wants. He is one of those artists that loves both rap and melody. His love for different types of music comes through his artistry, and it’s hard to put him in a box. Ben can spit rhymes with the best of his contemporaries, but he’s also got the voice to buoy his rap talent, something that not a lot of rappers come by so easily. 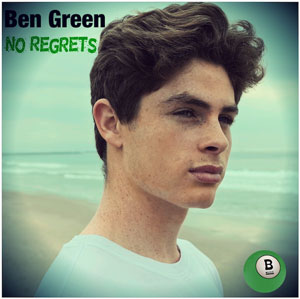 Ben Green, with his sweet and snappy Californian flow, offers a fun alternative to his heavy-tongued contemporaries, and those intoxicating soundscapes that back him up, seep through to sustain his rhymes perfectly. He’s a vigorous young MC who throws a lot at you, while always carrying the weight of his songs with burning charisma.

Ben’s songs get your heart pumping and your spirits soaring while you bob your head along to the beat. The beats are infectious, the rhymes are tight, and the singing is strong. I don’t think you’ll grow tired of them until they grow tired of you.

“No Regrets” is constructed with the same material and formula. In other words: This song doesn’t mess around. Ben Green approaches music the same way today’s listeners do, with no boundaries, and its working with that mindset that makes this record so good.

Everything flows and the lyrics never cease to be uplifting and self-empowering. It’s clear from the first note to the last that this single wasn’t simply created as much as it is built, as close to perfection as possible, from the ground up. Nothing is rushed and never do the lyrics turn entirely to hype.

This is music created by a young artist surviving in a world of people who take the easy way out. Don’t just enjoy this, appreciate it because tracks crafted this well are few and very far between. “No Regrets” is the kind of track you tell all your friends about and, if they don’t act upon your recommendation, purchase a copy for them, just to spread the word.

Glistening effects and a delivery that goes down as easy as iced-tea on a hot summer’s day, this is a winning single, and yet another slow-groove introduction, to a versatile newcomer. Get used to Ben Green, he is going to be around for a while.

Scambler: “A world unknown” – achieves every goal it set out for!