FooN is a hard rock band from Denmark who started out as a two-piece band and have grown their ranks, as well as adding Olivia Vestergaard on lead vocals....

FooN is a hard rock band from Denmark who started out as a two-piece band and have grown their ranks, as well as adding Olivia Vestergaard on lead vocals. Olivia joins Mathias Schwartzbach (Guitar, Bass, Vocals) and Emil Frøsig (Drums). The switch to a female vocalist gives FooN a sweeter melodic edge which nicely contrasts their hard driving riffs and rock rhythms. The award-winning band’s tracks now tick all the boxes you’d expect from an arena-type band, with walls of guitar sounds and easily memorized choruses. More crucially though, no song on their latest record – the 4 track EP “Tidals & Embers” –  feels like filler, and it certainly doesn’t fall into the category of product put out as an excuse to fill radio space, like you might see with many other contemporary rock bands.

FooN’s music has taken a turn for the grandiose, but without losing its sense of intimacy. Everything from the guitar overdrive, Olivia’s impassioned vocals and the rest of the instrumentation feel precisely crafted. There’s nothing left to chance here – no improvised touches or imperfections left in to give the record a sense of purity.

Here FooN deliver a masterclass in precise, well-crafted rock, which still embodies that raw spirit of rock and roll. Opener “Watercolours” sounds absolutely huge. This song is sure to be genuinely thrilling in a live capacity. 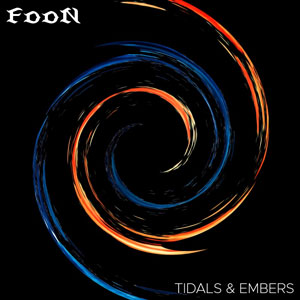 Brilliantly angsty growling guitars, meet forceful but melodic vocals which showcases the bands new mainstream sensibilities together with their assured grittiness. “Mirror” sees the band building on their older offerings, expanding upon the firm foundations of guitar-bass-drums.

The warmth of the track exudes through its overdriven guitar textures, while the vocals elevate it to a new kind of hypnotic anthem. FooN are a band whose performances are characterized by extreme energy, passion and satisfying amounts of decibels.

Which is exactly what they deliver on the epic arrangement of “Unearthly Child” – a track filled with angular guitar riffs and big banging drums. The record closes off with “Long Live The King”, which is FooN’s latest and most visceral battle cry yet.

A barrage of sound builds up the suspense, as the fuzzy guitar strums make way for a literal explosion. It instantly sounds like FooN at their best, with Olivia declaring: “A kingdom lost in vein, where sickness is cure.” She sounds confident and defiant on top of the monstrous percussive sections, rigid basslines and fierce guitar segments.

The track is a hauntingly anthemic example of what FooN are best capable of – rocking the fuck out. In terms of the whole record, though, the band show they are capable of doing so much more too. They build up suspense from the word go, with driving rhythms and stadium rock-guitar riffs.

The record offers something for everyone, whether it be in-your-face rock or more lilting fleshed out arrangements. There’s an evident flexing of creative muscle apparent on all tracks here. A resounding sense of menace and an ever-present grasp of triumphant melody, gives the band a new edge and urgency. With “Tidals & Embers” FooN produce their slickest and most grounded record to date.

Tara Flanagan: “Tear Apart” – the star power and talent to be huge!