Jo Oliver: “Shine On (You)” – an impressive aptitude for soulful rock-writing

Jo Oliver is an independent Soul-Rock artist with many years of musical experience and the ability to write catchy melodies and combining them with rock hard hooks and thundering...

Jo Oliver is an independent Soul-Rock artist with many years of musical experience and the ability to write catchy melodies and combining them with rock hard hooks and thundering rhythms. The US portal ranker.com put him on the list of “Best Soul Rock Artists/Bands”. Jo has spent many years working for other artists and publishers as a composer, songwriter, arranger, studio musician, producer, and sound engineer. This garnered him chart placements and collaborations with people like Keith Tynes (Platters) and Richard Palmer-James (Supertramp), among others.

In his debut solo release “Shine On (You)” he sings and plays all the instruments, as well as did all the arranging, music producing, mixing and mastering himself. Jo also hit the Top 1 spot on the Amazon Germany Download-Charts in the Soul category, even though he is more Soul-Rock orientated.

In order to appreciate “Shine On (You)”, you have to be able to misplace your snob instincts for four or so minutes. Jo Oliver isn’t here to bury modern music, but to praise it, or at least to place it in the greater continuum of rock and soul. Obviously, proudly traditionalist musically, Oliver is also a progressive forward-thinker.

This is a track that will remind rock and soul fans of its musical heritage in a familiar, non-threatening way, and suggests that the musical future, with all its electronics and technology, doesn’t have to be a scary, unknowable entity, as Jo makes it all look like a slickly repackaged version of the past.

Showing an impressive aptitude for soulful rock-writing, “Shine On (You)” is filled with thundering rhythms, crunchy hard-nosed guitars, sweet harmonies, resonant vocals and soaring choruses. With the combination of enticing vocal deliveries and groovy instrumentals throughout, this is unquestionably a joyous track which is constantly eager to please. 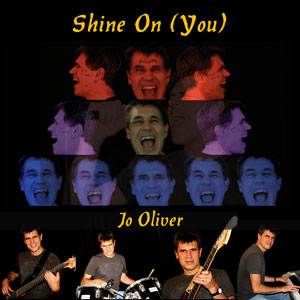 The world could use more artists like Jo Oliver, in-order to make our pop-rock stations more susceptible to uplifting, delightful melodies and tracks with plenty of heart and soul held within. All the same, Jo Oliver looks like he is here to stay and his additions to the genre will be appreciated, even though he is only one of a few.

Appealing to a wide range of fans, with its driving rhythm section and big sounding drums, the song packs a mean punch with its astute lyrics, accompanied by Jo Oliver’s passionate vocal performance.

Jo sounds like a man on a mission within the choruses, where he bellows and roars like a caged lion, through every line. As “Shine On (You)” comes streaming through your speakers, you get the feeling that Jo Oliver is at the peak of his professionalism here.

Though well thought-out and calculated musically, Jo’s composition sounds more organic and heartfelt than most of his current-day contemporaries. That’s probably because a song like “Shine On (You)” has been contemplated, performed and produced in such a skilled way that it could belong to any musical era – from the eighties and nineties, right up until today.

Alex Dutty: ‘Knock Down Ginger’ – realness in a fake world