Lord Avatar II a rapper from Manchester, is getting ready to bring a bit of Brit clout into the modern pop-trap scene. His story and his style are things...

Lord Avatar II a rapper from Manchester, is getting ready to bring a bit of Brit clout into the modern pop-trap scene. His story and his style are things we’ve seen from artists like XXXTenacion, Lil Uzi Vert, Lil’ Pump and other upcoming rap freshmen. With thematic ties to modern rap icons like Gucci Mane and Chief Keef, this English tornado is taking the opportunity to really prove himself, with his latest release “Hayley (Diss Track)”. Lord Avatar II was born Ashley Ellison in Manchester, England. He became Lord Avatar II in 2009 when he became the leader of a growing religious movement in the North West of England.

He started out as a writer and quickly moved into other areas of creativity, most notably his music which quickly generated mass following in 2014. In 2017 he made numerous appearances on radio shows and did a few interviews for magazines about his music. Most recently he started producing film and TV, but he is yet to start his professional acting career. 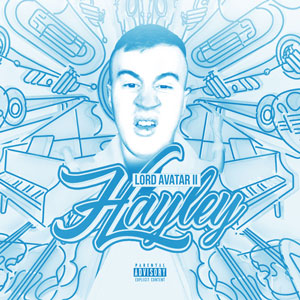 Though in niche saturated with talent and music, I actually wound up liking “Hayley (Diss Track)” a lot more than I initially thought prior to my first listen. Also, something tells me many others will feel the same way as I do about it because of the twisted lyrics and diss content.

They won’t be able to simply write Lord Avatar II off as another modern day mumble rapper, because he doesn’t mumble, which is a whole other conversation that I will save for another time, and for a different set of rappers.

What makes this different from the outset, with respect to his contemporaries, is that the track length only stretches to the two-minute mark which means that Lord Avatar II doesn’t overstay his welcome at any time. “Hayley (Diss Track)” embraces modern trap aesthetics as its primary color.

Lord Avatar II’s head is held high, there’s bass in his voice, and his delivery has solid confidence. He doesn’t try to say anything insanely out of context like his American brethren, but instead showcases his braggadocio energy and his melodic musing with the intent to get some things off his chest.

With a little more bite and a touch more bass, there’s absolute potential for Lord Avatar II to see his trap offerings enter next summer’s banger territory. Trap music may not be his natural, sonic temperament, as I’ve heard him do Soundtrack and EDM music, apart from rap.

But he sure knows how to knock together the elements to achieve the sound that other breakout SoundCloud stars have achieved on the strength of bubblegum buoyancy and melodic singalongs. Plus he has the added privilege of being able to lean on his wry Brit wit for extra diss power. Lord Avatar II is running with music’s new crowd, and has no intentions of falling behind. it’s a far more impressive sight to see than I imagined.