“Truth is” – EvaOni makes her mark

EvaOni is a native of Connecticut, but has heartstrings in Florida. Her vocal background is in gospel music, and she has performed in every state along the east coast,...

EvaOni is a native of Connecticut, but has heartstrings in Florida. Her vocal background is in gospel music, and she has performed in every state along the east coast, as well international performances in the UK and France. Backed by solid beats and engineered by a Grammy Award winning veteran, EvaOni is equally capable of making songs for the dance floor, as well as for the bedroom and post-breakup confessionals. More than anything else, she uses the subject matter of relatability to connect with audiences. Her single, “Truth is” jumps feet first into the water, allowing listeners to bathe and soak in lush vocals and a rich arrangement. 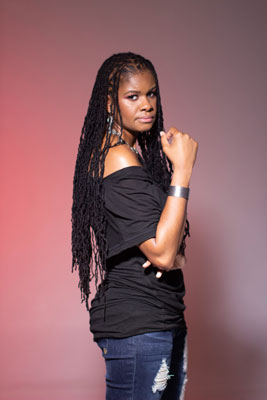 The track kicks in with a solid beat and vocals that slip between traditional R&B, and modern pop with a rock twist, which molds in a positive manner. Lyrically arranged with a cross-section of true-to-life sentimental confessions – which is claimed to be a work of fiction – EvaOni makes her mark.

“Truth is”, is as much about regret and loss, as it is about self-awareness and empowerment. It looks at the conclusion of terminated relationships with diverse and opposing reactions. There’s a sense of drama and heartfelt emotion from the start as EvaOni sets up a record that discusses love from varying angles.

The players change, but the game remains the same, as the common negativities of sentimental relationships persist, along with the rarer positives. And EvaOni brings to the fore the heartfelt feelings of each in “Truth is”.

The songwriting is successful and well-suited to EvaOni’s strengths.  She’s got a voice that excels at big songs, driven by the failures and triumphs of love and resolve.

EvaOni exhibits a tangible fierceness, even with soulful cues employed here. She can be sensible and tender with Jay: “My first real love, you were ready for a life. But I was too young to be a good wife. The truth is I should have kept you honey.”

And then she’s capable of being incredibly blunt when she drops the four-letter word. Notably pissed off, she shows her more explicit side with Rob, dropping lines like: “Fuck you. The truth is, I never loved your ass. The truth is I hated coming home to you.” 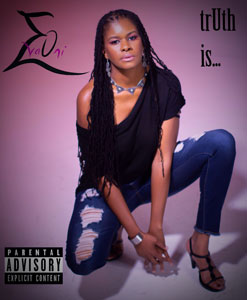 Vocally, she’s able to grapple with a wide range of contrasting emotions and bring them to the table convincingly.

EvaOni has a voice that will captivate audiences with its emotional, raw deliveries that pull at the heartstrings and give you goosebumps when it moves up a register. A strong and victorious EvaOni is the result of this performance.

As the songstress conquers the narrative of “Truth is”, with a poise and hunger that is indicative of her will to move her craft to the next level. She steps up to the plate as a mature and confident young woman, and artist, that has arrived, and is ready to back up her personal fight to breakthrough and triumph.

The “Truth is”…I think she has the talent and conviction to do it. The production, all the way down to the vocals and lyrics, is magnificent. Fire straight through!

George M: “Liquid State Of Mind” is a radio-ready cut