Mimmo Ripa, aka Aboutmeemo, is a self-taught bass player, guitarist, and songwriter. He started playing the guitar when he was 14, and has played with punk bands Gioventù Bruciata...

Mimmo Ripa, aka Aboutmeemo, is a self-taught bass player, guitarist, and songwriter. He started playing the guitar when he was 14, and has played with punk bands Gioventù Bruciata (meaning “Wasted Youth”) and Blood 77, the 70s hard rock band V.S.A., indie Italian rock band Nulla tace (meaning “Nothing is silent”), and American grunge band Bleeding Scar. Mimmo who embarked on what he calls “a personal journey to freedom” – from Italy to Ireland – will be releasing a brand new EP in April which will be promoted worldwide. In the meantime we caught up with his 2017 album release, “Souvenirs”. The album goes to great lengths to establish Aboutmeemo as a viable solo artist. In fact, there’s a lot to like about this album, and a lot to take in.

“Souvenirs” is a great indie alternative rock one. From beginning to end, no weak points, no fillers, it’s all-killer material. As a matter of fact, I’m curious about what Aboutmeemo will do next, it’s quite a task to top this one. Profound, assertive, moody at times, hopeful at others, the result is some of the most intense and what truly feels like meaningful music.

The voice of Aboutmeemo is powerful enough so that none of the elaborate guitar orchestrations or driving rhythms can drown it, feel forced for effect, cheesy, or anything but tremendously dynamic. “Souvenirs” is a well-constructed and vibrant record with 12 over the top tracks.

The album begins with “Get It Right” which is a rich gritty guitar driven ballad. The dazzling effort put on songs like “Grown Old”, and the slow burning standout “Shapeshifter”, with its grungy tones makes this solid recording stamp a clear mark on today’s independent music industry.

This song is the reason why Aboutmeemo should be considered a very important singer-songwriter today. The track like many others on this record, has conviction in the voice of its singer and attitude in the music.

The one thing I love the most about “Souvenirs”, is beyond its crunchy and captivating guitar sounds, which is evident on a song like “Short Loves”, is its emotional stirring rhythms and affecting arrangements. Aboutmeemo can also strip things down, and go with a minimal backdrop, something he does on the opening of “432 Hertz Mind”, before allowing the song to explode with a thick layer of guitars. 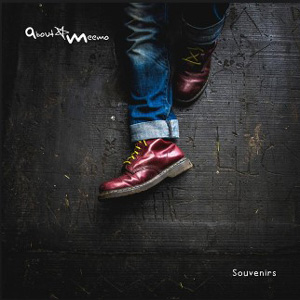 “Soaked But Dry” showcases another introspective start which slowly builds into an intense rock ballad. Here again the guitar arrangement and performance shines. This is another album highlight.

“In My Room” sees Aboutmeemo show off his acoustic guitar prowess, before the drama begins with the dark and ominous “Forgotten Lies”, a song with driven determination. You might find yourself gently suspended in time by the quixotic, surreal intro to “Sweet & Sour”, a song that will hit you emotionally.

Another highlight comes in the form of the title track, “Souvenirs”, which again makes ample use of sweeping acoustic guitar interludes. A musical tapestry punctuated with haunting vocals, rich strings, and lush guitar layers. By the time you reach the final track, “Up Here”, you would have understood that Aboutmeemo is the real thing in a musical world of sham and hype.

Rough around the edges but rocking, poetic and penetrating on the inside “Souvenirs”, takes us into Aboutmeemo’s alternative rock vision. This is a must have, if you’re tired of the watered down pop, or the cloned rock that has drowned out the real music scene for the past few years.

Eleaze: “A Song for Bonita” – a song born of pure human emotion