Sixteen year old singer songwriter Mandi Macias has been writing and singing since she was 8 years old. Yet to be fair she started performing on stage as a... 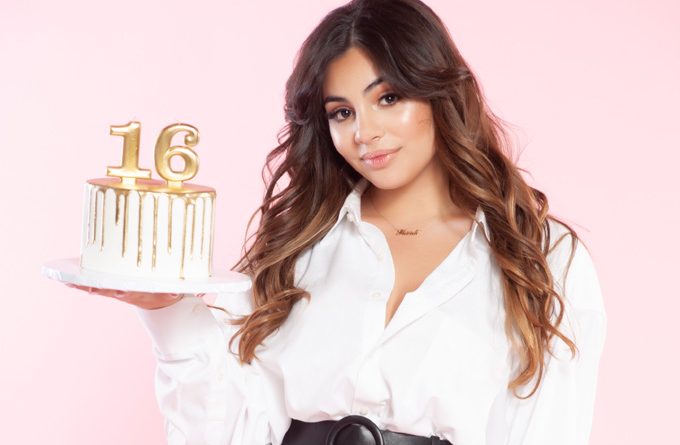 Sixteen year old singer songwriter Mandi Macias has been writing and singing since she was 8 years old. Yet to be fair she started performing on stage as a competitive cheerleader at just 5. She also acted and did musical theater at her local church and middle school. By the age of 8 she was taking piano lessons, and wrote her very first song – “Old Pal”– a year later, when her nanny Barbara passed away. From there onward she nurtured her songwriting craft and fueled her passion for singing by recording with several music producers. In between, she found time to record a cover of Camilla Cabello’s “Crying in the Club”, as a way to increase her visibility, though her true ambition remains being an original songwriting and performing artist.

Talents she undeniably showcases on her EP, “Sixteen”, which was released during November 2018. The EP followed the release of her debut single “SITMF” ft. Precious Way, which dropped in July of the same year.

A key part of the EP “Sixteen” that’s clearly noticeable is its bold ambition. In 5 tracks, the recording ranges from slow to mid-tempo R&B, to mainstream electro-pop. Mandi Macias’ visions are sky high, but still manages to deliver a set of flowing music that blends together perfectly.

In addition, she makes good use of the strengths in her vocal abilities – creating sultry, soft tones that often lead to resonating full-throated choruses. Along with the neat production, every layer of each song sounds distinctive and clear.

Sexy without trying to shock, poised without the need for posturing, and precociously mature without being portentous, the young songstress’ artistic center comes into focus here, as reserved, yet assured, with a sense of diffusion and restraint.

The title track “Sixteen” has the typical upbeat, teen popstar soundtrack, made to ram its way to the top of the charts, but what’s ironic is that catchy as it is, it doesn’t outshine the softer mid-tempo jam, “Obsessed”, which is unexpectedly captivating, and could easily satisfy the ears of radio listeners with its powerful, introspective choruses, and honest narrative.

Instead of going fully wild, unpredictable and over-the-top, like most of her more famous contemporaries, Mandi Macias is sophisticated and controlled, while still forging a sense of bold confidence. Life has its share of ups and downs for any growing girl, and channeling these experiences and emotions into her music makes for a wonderfully enjoyable and relatable listen.

One moment she is warm and romantic, as on “Wild Love” which describes her sentimental aspirations: “You make me feel so high. You make me come alive. Let’s make this moment ours.” Then one track later, on “Not Ur Baby”, she is cold and aloof in shunning someone: “I’m bright like a star in the night. I was destined to reach the sky. You know that you are a fool wishing you were still mine.”

So within the space of two tracks, we get to see both sides of the same coin, as Mandi executes her songwriting prowess, and her ability to express opposing emotions with equal determination and success. Even more impressive is the insightfulness of her lyrics which totally belies the perceived virtues and vices of her tender age.

The songwriting “cherry on top” though, comes with the beautifully poignant “Young Girl”.  Heartfelt lyrics blend with exquisitely nuanced singing, resulting in what for me is the most impacting song on the entire EP. It is a stunning all-round performance from Mandi Macias, and one that leads me to believe that as long as she can keep her momentum going, she has a really bright future ahead of her.