Rich Pesos is an American Hip Hop artist, who has been creating music for over a decade. In 2019 Pesos released the single “Already Know”, which pays homage to...

Rich Pesos is an American Hip Hop artist, who has been creating music for over a decade. In 2019 Pesos released the single “Already Know”, which pays homage to his wife and their story. Not content, and with the feeling that this could be his year, Pesos also dropped “No Risk”, alongside Money Zoe, and featuring Kevin Hues. He completes his triple assault on the industry with the single “Make Her Dance” ft. Esquisite. On these tracks Pesos was certainly supported by some genius producers who you can tell really gave a damn about music. Hard-hitting, powerful drums, and superb synth production, push these tracks into total earworm status.

Any significant status that Rich Pesos is quietly building up in his quest to break open the industry, clearly depends more on his skillset more than it does on any hyped reputation. Pesos drives a liquid flow and storytelling narratives, bathed in warm washes of melody.

The aforementioned ear catching elements are instantly recognizable on “No Risk” ft. Money Zoe and Kevin Hues. As a modern-day rapper, Rich Pesos is a three-dimensional rapper with an unlimited lyrical range and ability, to which he adds undeniable presence and charisma.

Pesos’ flow has a narcotic effect and is further stressed with his use of rhythmic deliveries. Regal synths and staggered 808’s flutter under his vocals, leading to the infectious hook on “No Risk”. There are plenty moments of positive motivation on this track, while Pesos and company expand the theory on their money-making hustle. 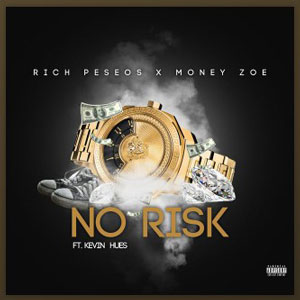 Rich Pesos knows how to use his skills to nod some heads and shake some booty too. Which is exactly what he sets out to do with “Make Her Dance” ft. Esquisite. The cutoff off in frequencies of the low end give the song a sense of elevation.

The producer of the record did an amazing job, especially with the percussion. The drums compliment the smoothness of the whole track which sit very well overall in the project, giving it balance.

The synth keys behind the vocals add a lofty feel that makes everything feel appropriate. The song’s groove delivers a different feel than the hard trap sounds that is usually expected from modern hip hop, as it conjures up a rhythmic Afro-Caribbean flavor.

“Already Know” which is the senior release of the three, maintains the booming 808’s, while the bars on top hold your attention and force you to relate to Rich Pesos’ ode to his better half. This is the track that gives a sense of hope to those in relationship struggles. “I already know she gonna ride for me. Shorty keep it real, she won’t lie to me.”

There’s pride and love in this work, and it comes shining through every bar.  It is a polished, modern-sounding track and has the potential to become a popular song on satellite radio. The twinkling keys in the background create a harmonious effect, while the clanging bass underscores Pesos’ assuring statements.

This is a set of quality tracks that deserve the proper attention. It was created in a mature state of mind, as Rich Pesos demonstrates on each track how to set the mood and tone with great precision within a dynamic structure.

Throughout these tracks Pesos makes it known that he’s aiming to be an elite artist in this game, but he’s doing through tracks that are relatable, danceable and extremely listenable. Three elements that many artists find very hard to group together in any one song. Rich Pesos gets it right 3 times out of 3. The man’s on a roll!