I recently grabbed a listen to the track “High Life” by South Carolina female rapper, Ladybug, who incidentally has her own record label, and has been writing music since...

I recently grabbed a listen to the track “High Life” by South Carolina female rapper, Ladybug, who incidentally has her own record label, and has been writing music since he was in the 7th grade.  Now if you’re expecting the foul-mouthed, sex-kitten trading her wares to gain momentum, think again. Not that she isn’t sexy. On the contrary she’s fiery hot, but she’s channeling the heat through her lyrics and flow. If anything, it left me wanting to hear much more of the latter, which radiates with an infectious palpability, setting her apart from her contemporaries.

Ladybug’s playfulness is addictive; you’ll want to join in the fun, but at the same time, there’s an authority affirming that you’ll never really be on the same level, though you try nonetheless. There’s a lighthearted nature on first impressions, in part due to the grace with which her verses are carried through the air, but this is owed to Ladybug’s skill. 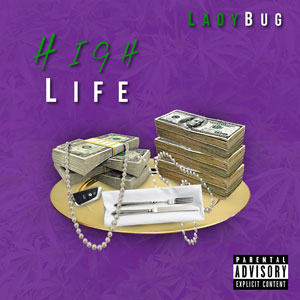 There’s obviously a genius capacity involved in crafting this songs the way she does. There’s no bullshit and no pretentious snobbery. The song is not overblown and the simplicity is beautifully executed as she connects with listeners.

Her streetwise aesthetic is a far cry from the dark, morbid and frustrated raps of her contemporaries. Ladybug is fantastic, she makes no ridiculous sexual promises, while putting together an amazing library of uplifting sounds and thoughts.

She has one of the most unique female rap voices in the game and unlike the current wave of auto-tune abusers, has the ability to rap with her natural voice. If you want to hear the true essence of her flow and her rap ability, “High Life” shows her ability to turn her controlled and understated voice into something powerful that can tie you up, and make you enjoy it.

“High Life” foregrounds Ladybug’s technical prowess and sharp-tongued lyricism. The production gives the track the right mix of punch and polish, ensuring the sting of Ladybug’s words sticks with you for a while.

She is definitely making her stance in the hip-hop game with her latest music work, and the music video is further proof of that she is creative, charismatic and visually appealing. Ladybug is part of a select group of rappers who are well disposed to keep audiences entertained and at the edge of their seats with every line.

Ladybug is definitely a threat to all the other female emcees in the game right now. She has a flow that is captivating, and conveys her lyrics in compelling ways. If “High Life” is any indication of Ladybug’s direction, it looks like she’ll not only live up to any sky high expectations, she’ll surpass them like a boss.

With Ladybug jumping on this single and reminding listeners of her dagger sharp rhyme skills, it’s likely only a matter of time before an album lands as well, hopefully sometime in 2019.

Real Talk: “Across The World” – immersive, mature, and game-changing!