The Gary Douglas Band: “Million Miles Away” – a sense of purpose!

Even when Gary Douglas indulges in modern production flourishes, his songwriting always hews close to the sound and spirit of the roots Americana heritage: tough, straight-talking, occasionally sentimental, adjacent... Even when Gary Douglas indulges in modern production flourishes, his songwriting always hews close to the sound and spirit of the roots Americana heritage: tough, straight-talking, occasionally sentimental, adjacent to the rebel spirit of rock n’ roll. At the same time Douglas doesn’t fall into the same trap we’re seeing all across roots based music, which is the theory that the music sounds better when purposely made it sound like crap. Like the genre’s forbearers did it. Which is completely untrue. The forbearers were working with recording limitations, but they always did their best with the equipment provided. And that is exactly what The Gary Douglas Band sets out to do on their recordings.

In the studio, he backs up his Americana and heartland rock n’ roll motifs, with the help of Southside Johnny and his Asbury Jukes keyboardist Jeff Kazee, The Mavericks’ Raul Malo and Paul Deakin, The Jayhawks’ Jennifer Gunderman, guitarist Josh Leo, saxophonist Nicholas Biello, and a host of Nashville’s finest session players. 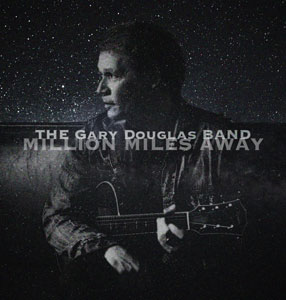 The result is a collection of songs that are persuasive and endearing, with emotions that are totally believable.

Now from the acclaimed album, comes the third single release, entitled “Million Miles Away”, which sees bandleader, Trial Lawyer and Hall of Fame Attorney, Gary Douglas, grappling with the tropes and trappings of people in need, or in want of change – not celebrating them so much as telling it the way it is.

It’s almost a reminder that Douglas can sometimes out-Springsteen The Boss himself in the emotion-stirring Americana stakes. The track, and to be honest the entire album, is propelled by this relentless focus and ultra-confidence.

Douglas swaggers and sings his way through it all with an attitude that feels lived-in and earned. He’s able to balance his grizzled persona with moments of heartfelt candor, as the song pairs Gary’s emboldened narrative with a sound that’s dynamic and direct.

The guitar is melodic, and the piano adds dimension, as the backing vocals bring on the harmony, leaving just enough space for Nicholas Biello’s saxophone to soar in the solo. Douglas never sounds less than fully invested in his narrative, and that sense of purpose infuses the track with a palpable urgency.

In its character study, “Million Miles Away” is incredibly compelling, both lyrically and musically. Whenever I listen to The Gary Douglas Band, I almost always ask the question. Is Gary Douglas primarily a musician or an activist raging against the establishment? He’s actually both.

At his very best, Douglas stands out as arguably one of the more intriguing and daring Americana songwriters around right now – his artistic voice suggesting the perfect storm, made up of poetic instincts, precision craftsmanship, a sense of purpose, and a fearless-hearted rebel. In the modern, technologically-aided music era, Gary Douglas is a breed apart.

Tia McGraff: “Stubborn In My Blood” is an excellent showcase of her awesome talents!