Framingham High graduate, RyGuyDaKid, is from just outside of Boston. Passionate about music he has been writing songs for as long as he can remember. RyGuyDaKid has an ongoing...

Framingham High graduate, RyGuyDaKid, is from just outside of Boston. Passionate about music he has been writing songs for as long as he can remember. RyGuyDaKid has an ongoing collaboration with producer NoBveno. The have just finished their latest project, the single “Bitch Starve”, which is now available on all major download stores. RyGuyDaKid is a technical typhoon of a rapper; his ability to slice up the rhythms within words and stick them together into neatly spit collages that match the pulsing bang of the hi-hat hissing beat is a joyous spectacle. For an up and coming artist, he plays the game and plays it good. On the songs he has released so far, RyGuyDaKid has reached to the four corners of modern rap’s globe, bringing out sounds to appease even the most reluctant of fans. And on “Bitch Starve”, he goes one step better.

This pops with an obvious fetish for unique drum patterns, heavy bass, and an eclectic synth melody, which counterpoints the rapped verses. “Bitch Starve” captures the essence of RyGuyDaKid which is ready to evolve into something more substantial. Technically polished, its substance and merit are surprising, considering he is on his third single release. 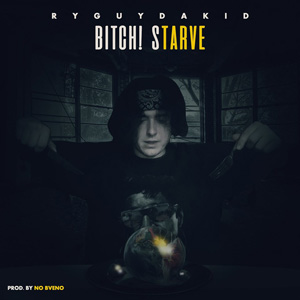 RyGuyDaKid’s music is melodic, outspoken and snaky, as it serpentine’s spryly through low trap rhythms and big beats. Particularly radiant and intriguingly explicit, the rapper ruminates in rough-and-raw fashion. With his third release, RyGuyDaKid hits his prime; a peak he will have to work hard to surpass.

RyGuyDaKid sounds pleased to be himself, without pause and remorse, and able to brag about his sexual escapades without wincing. The track’s overall production by RyGuyDaKid’s main man NoBveno sparkles like never before, and lends itself to the loosely thread, sharply needled hedonistic venting handsomely.

This is a balling thrill ride. Fueled by this classic trap-influenced beat, RyGuyDaKid eagerly peppers the bars with the modernist school of rhyme he is clearly so comfortable spitting. Making “Bitch Starve” an energetic, endearingly explicit-around-the-edges experience with witty, caustic lyricism worn loosely about its sleeve.

RyGuyDaKid is an open book on this track, which I appreciate. He’s great at talking at us, as well as talking to us. Often in rap, it’s not about how well you spit, but about making the lyrics hit home. RyGuyDaKid’s delivery is impactful and, therefore, memorable. The power of dreams is quite amazing.

Raw ambition can serve as the most impressive of driving forces, and when it becomes an all-encompassing desire to achieve- the results yielded at the end of the road can often be more impressive than the dreams themselves.

What RyGuyDaKid ultimately achieves in his future career is still to be seen, but his current expansion in confidence and prowess, promises well. The potential, the ability and the brashness here, is plain for all to see.

Miztah Brown: “Last Day” shines a light on his strengths

Noah Taylor: “Merida” – an artist ready to stake his claim!