Wav-Legion II is a 16 track multi-genre, multi-artist, collaboration project led by BC Canada musician, producer and singer-songwriter, Wav-Dr. and California singer-songwriter, Shavon Bonnie Legion aka Bonnie Legion. This record is a journey through multiple emotions and moods, but each of the tracks stand on their own. The album epitomizes the best of blended organic and electronic music, and shows a project at their songwriting and performance peak. This is an amazing journey through hybrid melodic arrangements coupled with smooth soulful female vocals and melancholy male vocal interludes, giving this album a very high replay value. The tracks are very powerful and have an epic like quality in instrumental composition. The electronic elements play off beautifully against the ever present acoustic guitar, fantastically powered by Wav-Dr. Bonnie Legion’s vocals, on the other hand, explodes in glassy shards, giving texture and energy beyond what each song’s smoldering mix allows.

“Wav-Legion II” is dramatic, action-packed, wraps up its narratives and provides excellent closure on each track. It’s mature, grounded and with the benefit of hindsight, bolsters the caliber of what can be achieved by hybrid genre crossing, and the absence of record labels. This is a stunning record, principally because of its colorful musical arc and complete cohesion – it’s easy to see why they’ve ascended past traditional format, and how they’ve perfected it.

Yet right from the first track “Escape The Mundane”, they’re extremely accessible and catchy as hell. The music is at once nostalgic and reminiscent of the legendary Fleetwood Mac’s heyday – sprawling strummed guitars, thumping kick drums, and richly layered vocals. 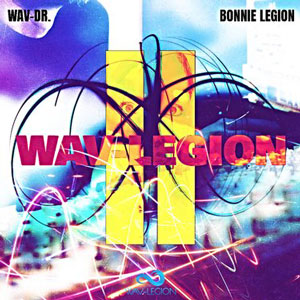 “Fear of Flying” suddenly invokes images of Florence + The Machine, allowing you to see the depth and breadth of Wav-Dr. and Bonnie Legion’s artistic scope. By the time you’ve pressed play on the beautifully ethereal “Money Time Life”, you realize that chasing analogies is an endless task.

“The Wav-Legion II” project, stretches, bends and morphs itself into an enormous quantity of sonic shapes and sizes. It’s much easier to concentrate on the composers, players and performers, who are consistently and fascinatingly sublime at what they do. Wav-Dr.’s guitar forges a myriad of textures and some stunning solos and motifs, while Bonnie Legion’s vocals is the perfect cherry on top of each track she performs on.

“Flip Side” featuring Metropolis Music, is another outstanding song which showcases a significantly affecting atmosphere, which Wav-Dr. is so good at constructing. Just as impressive, is rhythmic crunch of “Directions”. Moving ahead, there’s more depth, more intensity, more emotion, and more interesting collaborations on offer.

The growling “You’re Up”, which takes us into haunting Peter Gabriel-ish territory, is another solid standout. As is the soul-pop urgency of “Hello City”, which shows off a vocally determined Bonnie Legion. As does the resonating aura of “Soldier”. However, almost every song, when taken individually, is a gem, sprawling and superbly executed.

“Wav-Legion II” grows with each play, becoming increasingly transfixing, drawing the listener in with its spiral soundscapes and employing Wav-Dr.’s low-pitched, almost whispered vocals to great, yet subtle, effect, against the full-throated soar of Bonnie Legion.

I could go on and on naming standout tracks, but by now you should be fully aware that this album is an essential listen, whether or not I tell you that the “Missing It”, may just be the most captivating track of any genre I’ve heard this year, so far.

The mood-inducing aura, and artistic dexterity displayed on this song – both musically and vocally – is simply mind-blowing. If you only have time to listen to one song on “Wav-Legion II”, choose this one. I guarantee that you won’t be leaving anytime soon!