I feel like there are almost no words to describe the effect of Maeve Steele’s voice on me.  As a smooth and powerfully-voiced woman with a predilection for smoothly...

I feel like there are almost no words to describe the effect of Maeve Steele’s voice on me.  As a smooth and powerfully-voiced woman with a predilection for smoothly elegant tunes, it seems almost inevitable that she’ll draw comparisons to a certain amount of chart-topper. And despite her youthful appearance, Steele’s efforts to me seem richer and overall more mature than many of her contemporaries. Her music has its cathartic nature backed up by the technical science of emerging producer Cole Phillips and Grammy-nominated engineer Robert Venable. Listening to her double-sided single featuring the tracks “Real” and “Tourist” I feel a greater overall impact than her so called peers.

Let’s think of it this way. Her counterparts put out ear-blasting music for a roller-coaster fix. So it’s quick up, and quick down.   In comparison, listening to Maeve Steele is like unwinding in a lime, basil and mandarin oil bath that fills up inch by inch with emotional and revitalizing warmth. It’s a feeling that lingers long after the music has ended. 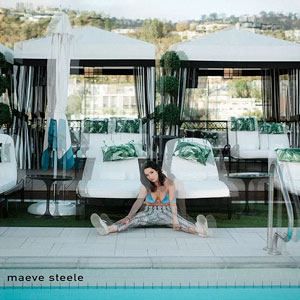 It’s a pleasurable way to go, because the composition of each track is so loving, and the lyrics so beautifully genuine and Maeve Steele’s voice so delightful, that you’ll feel awash with especially appreciative empathy. It’s absorbing, but in the way that truly special music can be; it’s not for the background, it’s there to make you feel captivated.

Your engagement with these tracks will astound you. One of the major strengths of both “Real” and “Tourist” overall, is that they’re never too overpowering; you’re not being bludgeoned through your ear holes with angst. Maeve strikes a balance between rhythm, melody and lyricism, and reaches a medium that is poignantly profound.

On “Real” Maeve is immersed in bed of fizzing percussion and gentle keys as she weaves her melodic spell, steadily reeling the listener into her narrative. Maeve knows the heart of great pop is a chorus that follows you to bed at night and greets you in the morning. It’s “Tourist” that I am most impressed with, but that’s mainly because I’m a sucker for slower piano-driven songs.

And this one’s hard to resist. The pianos resonate with oomph, as Maeve’s voice oozes sultry intensity. Her vocals are simply beautiful here and you can hear her passion throughout the song. A classically trained violinist, who also learned to play guitar and piano, her all-round musicality is a significant element of her craft.

In short, “Real” and “Tourist” constitutes a wonderful LP. It is deeply affecting while being technically impressive on all levels. Maeve Steele’s Pop-Noir as a whole is deft and accomplished. It’s minimal, but there is a compulsive energy running throughout that makes the experience of listening to it extraordinarily heartfelt.

I think this is a testament to her skill as a singer and songwriter, as well as the collaboration of her production crew. I look forward to her future output. Do whatever you need to do in order to get Maeve Steele’s LP in your possession. And then be prepared to wallow in the hands of a captivating songstress.