Santa Semeli and the Monks: “Where is the Disco in this Town?” – exuberant, expressive and powerful!

I recently ran through a handful of songs from Santa Semeli and the Monks, on their Spotify profile. I was amazed at the creativity and absolute diversity between each...

I recently ran through a handful of songs from Santa Semeli and the Monks, on their Spotify profile. I was amazed at the creativity and absolute diversity between each track. Considering they have over 100 songs in their catalog, the listening experience through most of their playlist must assume awe-inspiring levels. This is one project you cannot fit into any genre box…unless of course it’s made of some expandable and bendable material.  Semeli Economou, who collaborates with Icelandic musician, Haraldur Agustsson, was born in Munich, to the legendary Cypriot virtuoso concert pianist and composer Nicolas Economou. Semeli has studied acting and directing in London, before moving to New York where she started writing. As such, the innate theatricality in her skillset, almost always comes to the fore in her performances and music, making Semeli a one of a kind artistic chameleon. The project’s latest single, “Where is the Disco in this Town?” is a perfect representation of her craft.

If you’re looking for a track of feel good music, with an expansive artist dynamic, this is it. The whole thing is very theatrical almost Broadway inspired. Semeli Economou reigns supreme here. She holds nothing back and her vocals and performance are as exuberant, expressive and powerful as always. Her raw talent is unquestionable. 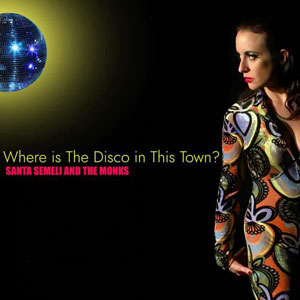 This is a well-crafted, beautifully executed, delightful and diverse track in the current music scene.  I think it will be tough to make an all-round better retro-flavored disco dance record than “Where is the Disco in this Town?”

The song’s ingredients – from the music, to the lyrics, the vocals, and the supporting visual, carries an effervescent air of tongue in cheek panache that modern music has all but lost completely, in its own haze of blazoned self-righteousness. Accompanied by funky basslines and jangly strummed guitars, “Where is the Disco in this Town?” conjures the vibrant environs of the discotheque in all its glory.

Of course, this retroism gets filtered through 21st century pop production like a sieve, resulting in an ultra-slick, impossibly pristine presentation of the sounds that inspired a generation to live for Saturday nights. This song is so groovy that it always feels like a Saturday night!

Semeli Economou’s vocals are slick, and has a power-charged flair for the dramatic. Chock full of disco spirit, she sucks you in and constricts her captivating grip until you find yourself nodding and foot-tapping towards aural ecstasy. It’s hard listening to this track without at least moving one part of your body, as the deliciously satisfying choruses and constant energy oozing from every bar delivers a sensation of transcendence.

Underneath all the theatricality and pizzazz hides Santa Semeli and the Monks’ willingness to experiment and challenge themselves as songwriters and performers, which always makes for an enthralling listening experience. Semeli Economou continues to amaze listeners with her unique alternative styles, and her vocals that seemingly only get better with each track the project releases.

Of course every now and then Semeli veers away from her more left-field musical excursions, to release something as infectious as and accessible as “Where is the Disco in this Town?”

Tags
DanceDiscoPopSanta Semeli and the MonksWhere is the Disco in this Town?
Categories
Reviews
SHARE THIS ARTICLE
OLDER ARTICLE

N I K Ø T E N E: “Lost With Me” refines things to a delicate art