Prince Black – “O.M. (Overly Medicated)” is yet another official ratification of his elevated status

If you normally don’t buy just any music, and when you decide to buy, it’s only for a few MC’s that have strong credentials and are worthy enough for...

If you normally don’t buy just any music, and when you decide to buy, it’s only for a few MC’s that have strong credentials and are worthy enough for your hard earned money, then put Prince Black on your shopping list. This Atlanta (GA) based artist, hailing from Queens (NY), is a true student of the game. A lyrical rapper with all the firepower of past legends, Prince Black has being making inroads towards the central marketplace, winning critical acclaim along the way with the release of a handful of explosive singles.

The rapper has made no bones about his mission to establish himself as a King of Hip Hop amongst staples such as Biggie, Jadakiss, and 50 Cent. So far he has amply showcased the determination and staying power needed to keep him on track towards his desired goal. His latest single, “O.M. (Overly Medicated)”, is yet another official ratification of his elevated status.

Prince Black is an amazing artist who interweaves crucial life lessons into his bars. What great flows and just solid writing. “O.M. (Overly Medicated)” doesn’t sound like a bunch of rap snippets that were stuck together to impress, the song is a complete story.

You feel every word filled with emotion and it’s my hope Prince Black continues to push himself into the dialogue for top lyricists in the game, which I’m sure he will.

He’s on a mission and won’t be denied. Prince Black is a rapper that relies on determination and inspiration. To listen to him now is to hear somebody who is trying to reach out to the audience, as he’s often spewing out advice and anecdotes. He’s talking to the listener more than the average emcee does.

Just one listen to “O.M. (Overly Medicated)”, and it’s clear that Prince Black’s best attribute is his voice. He has a rasp in his voice that he uses to his advantage. It even has the ability to make the sinful seem noble. 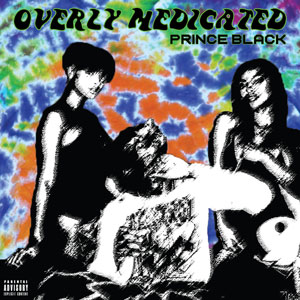 Singular in its delicate balance of hubris and bellicosity, his delivery provides the sharp punctuation to a production that is worthy of praise for maintaining a consistent level of craft and being impossibly catchy and soulful.

If established artists would put half his energy and creativity into their music, we wouldn’t have to hear about how broken the industry still is. With this song alone Prince Black does enough to separate himself from the other rappers currently in the game.

It becomes clear on “O.M. (Overly Medicated)”, that as long as rappers like Prince Black – a rare breed with determination and raw talent to back up the stories they tell, continue to walk the earth, the legacy of lyrical rap will remain in good hands.

Real music has nothing to do with sales, nor does it have to do with commercial success. Prince Black has proven that he can put forth a great artistic and technical effort when the rap world is watching. He’s been grinding for a while now, and it’s about time the whole world knew it and acknowledged him for it.

Luna Heist – “The Heist” raises her own high bar of excellence!