They had their critically album “Under The Weather” – recorded at the legendary FAME Studios in Muscle Shoals, Alabama – mixed by multi-platinum engineer Brian Reeves, whose credits include...

They had their critically album “Under The Weather” – recorded at the legendary FAME Studios in Muscle Shoals, Alabama – mixed by multi-platinum engineer Brian Reeves, whose credits include Billy Idol and U2 to Elton John and Miley Cyrus. Their music has been on heavy rotation on multiple indie, internet and Top 40 terrestrial radio stations across the U.S. and overseas, but one thing is even more undeniable: the powerhouse grit behind Hannah Summer astoundingly raw and mellifluous vocals is an impressive rarity in today’s musical world. That said, Hannah and the boys – collectively known as GREYE– are ready to raise hell once again with their brand new single “Lucky”.

“Lucky” is described as “an anthem for anyone who has ever had a dream that seemed too impossible to believe in – that one dream that you’ll do anything to achieve.” A classic rock feel permeates this killer track, which is embedded with valiant Americana and blues grit.

The groundwork for the band’s deliciously classic, blues rock sound is all there in their earlier tracks, but this time, they embrace it with a newfound fervor that is sincere and truly refreshing. In fact, the track is reminiscent of a time when rock n’ roll had soul and was not something that could only ever be recreated inside a studio setting,

GREYE’s raw, unadulterated grit crosses the rock stylistic spectrum, and anchors itself in everything that made this genre what it was. For those with soul in their hearts and a need for bluesy grit in their rock n’ roll, GREYE absolutely has you covered.

“Lucky” feels like it was made for the music system of a convertible speeding down a sun-drenched highway, but that’s not to say you can’t listen to it on the way to work on a winter’s day either. 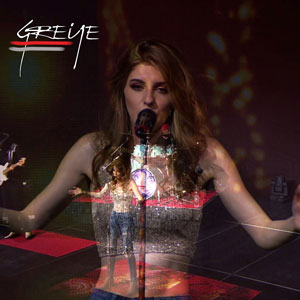 This is high-energy, exciting song that you should play on full volume if you need to hype yourself up. The guitar in this song is in front of the beat, and remarkably catchy. The musicality comes in waves, and climaxes in the chorus.

If you’re expecting Hannah as the wicked vocal temptress who came to raise hell with her voice – you’re right. Every so often you come across an artist you just know is going to make an indelible impression. Whether it’s their confidence, their talent, their pedigree, their determination, or some combination of all of those.

Hannah Summer is one of those rare talents. Sure, that might seem obvious, with her rock charisma, her incredible voice and her timeless vibe, but a lot of artists that appear to have the total package don’t succeed. Luckily Hannah has found the perfect nest in which to nurture her talents.

She is in a fabulous band of musical artisans, made up of Jett Wolfe (guitar and vocals), Josh Reid (bass), Ray Grimard (drums and percussion) and Ken-E Williams (keyboards). Together, GREYE convince us that rock n’ roll is alive and well. Buoyed by powerhouse vocals and musical bite, GREYE captures an authentic rock n’ roll spirit and struts it with direct and unapologetic energy.

LAIKIPIA obliterates everything else in its path with “Big Fish”

Kylie Trout epitomizes a true young romance in You & I