The Bay Area, broken down into Oakland, San Francisco, Richmond, Vallejo, San Jose and other surrounding cities, has its own sound, culture and movement that has influenced communities and...

The Bay Area, broken down into Oakland, San Francisco, Richmond, Vallejo, San Jose and other surrounding cities, has its own sound, culture and movement that has influenced communities and entire cities from around the country, especially Oakland Hip Hop. Today, the next generation of Oakland rappers have been keeping up the legacy of Oakland hip hop and the Bay Area music scene. Mr Bombay aka Bazialini, is a Hip Hop artist, and all around entrepreneur from Oakland Ca (or Deep East Oakland if you know the Bay). Born and raised in the East Bay, his musical roots run deep in Funk, Gospel and R&B. His unique sound (known as the Deep East Oakland sound), engaging word play, and tireless dedication to the Bay Area has helped to sharpen his craft and create fans across the globe. 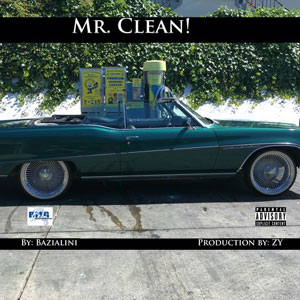 Mr Bombay raps are probably irresistible to both old-school and new wave rap fans: nonstop litanies of his conquests and his kingdom. His rapping is formidable and unique, never straying from hip-hop’s roots of vibrant storytelling.

If anyone doesn’t know the rapper’s game credentials, not to worry. He runs through the gamut of his most captivating elements on his latest single, “The VIP Ambassador”. Mr Bombay’s flow delivers all the raunchiness and rap star-power fans of the genre have come to expect of its executors.

Mr Bombay has created a new template for rappers from the South and other neighboring regions. Not only will artists and fans elsewhere dig his relaxed and sultry rapping style on “The VIP Ambassador”, but Mr Bombay also lets his contemporaries know that they can be themselves on a track.

Even among Oakland-based rap artists, one would be hard-pressed to imagine a style more distinct than that of Mr Bombay. He sounds like an artist who comes from another time in hip-hop, when artists were allowed to have their own lanes.

Mr Bombay puts a lot into his bars, ensuring they hold your attention over this mid-tempo groove. The beat is patient, and so is the Oakland rapper’s cadence and delivery. His flow is so smooth. He jumps on this beat and finds a way to slide into its pocket. The second verse is cleverly explicit, displaying such vivid lyricism.

Mr Bombay has a fluid style; it never sounds like he’s overthinking. His rapping sounds instinctive, but it’s also so detailed, as every bar moves seamlessly into the next. The sense of self makes him powerful, as he describes the scene inside his new Mercedes. Every line is vivid. Mr Bombay would be great at writing screenplays.

From a writing perspective, the song paints Mr Bombay as a top tier wordsmith. “The VIP Ambassador” is a testament to his storytelling craft, but also to ZY, who delivered the perfect beat, inspiring high-level rapping.

ZY made a beat that sounds so elegant, and fits the late night narrative like a glove. There isn’t a single moment dulling the ears on this track. “The VIP Ambassador” is well-rounded and on point; served up by a rapper and producer who understand what it means to deliver a quality product.

Lilla Tillo – “Just A Dream” pursues her own trajectory