Izzies Caravan – ‘Stick It To Ya’ – rock and blues tropes that grab you by the throat!

Izzie started his musical journey by forming the 3-piece band, The Deep Impactors, in 2004. The unit included two future (and now former) members of the Izzie’s Caravan, Sim...

Izzie started his musical journey by forming the 3-piece band, The Deep Impactors, in 2004. The unit included two future (and now former) members of the Izzie’s Caravan, Sim and Ray. After becoming disillusioned by the music industry, Izzie took a decades-long respite from guitar, eventually returning to the instrument he loved, just a few years ago. The blues-rock outfit, Izzie’s Caravan was launched, and the band hasn’t looked back since.

In December of 2019, Izzie’s Caravan released the EP, Leo’s Guitar, followed by the February 2020 EP, Zephyrs. Izzie’s next EP, titled On The Pull was released June 17, 2020. The first single, “Drownin’ Man’s Blues” hit #1 on the iTunes South Africa blues chart. In September 2020, Izzie’s Caravan began a “10 for 10” release schedule, releasing 1 single per month, from their upcoming full length, Blow The Lid.

We recently caught up with the band’s new single, “Stick It To Ya”. The track is a raunchy package of hard driving riffs, right off the mark. Throw in a few screeching breaks, a couple of searing, soulful guitar solos, combined with concise vocals and you have something unique. All throughout the band’s rock and blues influences steadily to the forefront. 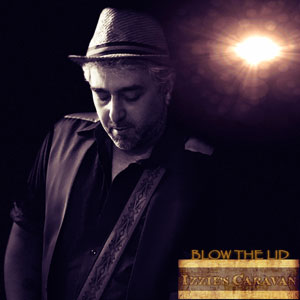 This is 70’s influenced music but with a varied approach. It has a roots rhythm layered into it, laced with a present day feel. Izzie’s Caravan represents an evolution of greatness and if they can keep it together, they will definitely make their mark, big time. The more I listen to this band the more I like them.

Izzie’s Caravan is what rock and roll is about. They don’t try to make top 40 hits, or use all kinds of electronic crap – they play what they feel and they play it well. This music is meant to be enjoyed through your sound system, awesome headphones or on a road trip. The bottom end is fantastic throughout the mix, Izzie’s guitar work is stellar and shows much more dimension than I have heard from him before.

“Stick It To Ya” is intriguing from the get go, with certain rock and blues tropes that grab you by the throat while others materialize tantalizingly. The raw, soul-blues vocal cry, hits angsty highs, and the drummer is in thunderous form. Ultimately, it’s the brooding mix of urgent and visceral keyboard and guitar tones that really pulls you in, and gives the whole track a gorgeously authentic quality.

Power. Dynamism. Virtuosity. Izzie’s Caravan brings all three of these descriptors to life in “Stick It To Ya”.  As a listener who’s been following Izzie on a few releases now, I approach each new release holding my breath, wondering how long the band can maintain the established trajectory without losing its edge.

“Stick It To Ya” is a solid gut punch that will knock the wind right out of you. This epic blues-rocker throws in everything Izzie’s Caravan has in stock – a thundering drum groove, rolling bass lines, brightly burning vocals and blistering electric guitars.

More significantly, “Stick It To Ya” is the sound of 2020’s answer to legendary blues-rock juggernauts of the past, throwing down the gauntlet, and daring the contemporary competition to make their move.

NoPlug Lonzo – ‘ICE’ ft Ezpz456 – brings his own lyrical and melodic tricks to the table!