David Alex Barton has been an integral presence in the New England Music scene for many years – from his teenage days as the founding member, songwriter, vocalist and...

David Alex Barton has been an integral presence in the New England Music scene for many years – from his teenage days as the founding member, songwriter, vocalist and guitarist for Boston’s legendary power pop punk band The Outlets, to his current country rock band Tattoo Cowboy and his acoustic country band Blame The Whiskey. Here he presents us with his project, the David Alex Barton Band, and the single “Heart Achin’ Whiskey Drinkin’ Night”. On this latest track David blends country flavors with a little taste of rockabilly, giving the sing a melodic, upbeat momentum that will keep you swinging the night away.

While all around him are drowning in samples, loops, plugins and other synthetic wizardry, David Alex Barton brings us three and a half minutes of authentic, organic sounding bliss. You won’t find any artificial gloss or gleam, just a whole lot of soulful honky-tonk grit.

After many years in the game, David has expanded his musical horizons to take in that which came before, inspiring his beloved musical roots, gathering up armfuls of influences along the way, and putting them together to make something quite surprising for our technological times.

David Alex Barton produces songs of simple substance and candor, all backed off with the resounding beat and honest lyrics of a man who understands his musical roots. It is a moment to savor and whilst it might be lost on a section of the new generation to whom these purified classic instrumental sounds are nothing more than a history lesson, to the rest of us it is manna from musical heaven.

David keeps things essential and grounded – a straightforward swinging rhythm, a tuneful ear-warming melody and relatable good-time story. And if you do it as good as the David Alex Barton Band does, you don’t need anything more to get a crowd and a groove going. David’s image too, smacks of authenticity, and when you hear songs like “Heart Achin’ Whiskey Drinkin’ Night”, you understand how the love affair with his genre’s conventions have lasted. 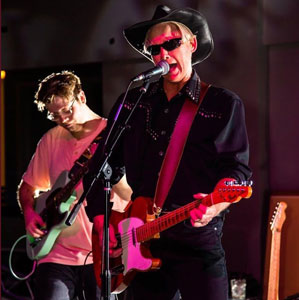 David Alex Barton’s songs that separately and collectively drill down into strata’s of country and rock, crack like a whip of outlaw defiance, in the face of electronic and computer-generated music. David’s conservative stance, seems almost impervious to the often fickle, modern sonic influences.

Once upon a time, “Heart Achin’ Whiskey Drinkin’ Night” would have been released on vinyl, which seems like its rightful place. But it sits just as comfortably on digital playlists.

“Heart Achin’ Whiskey Drinkin’ Night” is vintage honky-tonk country, giving you a clean slice of Americana in a loveable and feel-good three and a half minutes of upbeat fun. Country music has been crying out for a track like this.

It is a welcome single in a genre that is becoming more and more saturated with throwaway pop that will not last the test of time. “Heart Achin’ Whiskey Drinkin’ Night” makes for an exciting listen. If you have any affinity for the genre, it’s a record that will get you hooked straight away.

Beats by the Bay Release the Official Video for “Girl Dad”