The distinction between music and noise is, I think, perfectly described by Physics.info. “Music and noise are both mixtures of sound waves of different frequencies. The component frequencies of music are discrete, separable and rational, with a discernible dominant frequency. The component frequencies of noise are continuous and random with no discernible dominant frequency.” Hence, the further we delve into dissonant or even atonal music, the more likely it is to be perceived as noise. Ultimately the line between the two is very blurry, and writer Meghan Davis took this concept to task smartly, when she wrote: “Someone nearby is tapping their toe. Is this an irritating noise or a musical sound? As it turns out, the difference depends almost entirely upon the listener.” And that ultimately is the point my friends. The beauty of sound is in the ears of the beholder.

So why this long premise on sonic contrasts? Well, when you engage with the music of an avant-garde composer, and dare I say, sound designer, such as Gary Lloyd Noland, there is no sitting on the fence. You either judge his album, “State-of-the-Art Ear Exercises for Musical Cognoscenti Op. 119”, as ingeniously brilliant, or utter hogwash. If this hard and fast assumption sounds dramatically drastic, well then so does Noland’s classically inspired, post-modern sonic concoctions.

Gary Lloyd Noland, who has received glowing critiques, has a boundless artistic spirit, and a seemingly endless technical and musical ambition. His compositions strive to challenge the listener to cast away conventions, traditions, customs and any formal limitations their musical mindsets may have locked them into. The 18 tracks contained within this album will take you through sounds composed of multiple frequencies that are produced by instruments whose names alone will have your mind twisting into a loop.

Your ears will be teased, stroked, stretched, and surprised, by the featured players – Gary Lloyd Noland and his alter-egos: Orland Doy Glandly, Darnalod Olly Yang, Lon Gaylord Dylan, Dolly Gray Landon, and Arnold Day Longly. Even more surprising, are the names of the instrumentation used by the players. Among them, the pandaharmonium, squealharp, googah, unstitched concussion, stench horn, nose cello and toilet brushes. 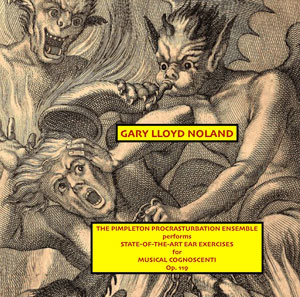 Now if you’re thinking of, outright dissonant bombast, think again. Because the album is awash with beautiful classical motifs filled with luscious melody and harmony. They’re simply interposed by varying flurries of atonal sounds which most people link to dissonance. If you could imagine an ensemble led by the combined minds of Richard Strauss, Frank Zappa, Brain Eno and Luigi Russolo, you may just have the slightest idea of where Gary Lloyd Noland is going. And that’s practically everywhere.

Even the song titles themselves will make you sit up and take notice: “Murder Hornet Lullaby”, “Vaginavenger Vortex”, “Elevator Mucus”, “Ooly Drooly Grubbles” and “Larcabounger Zizz”, being just a selected few. That being said, Gary Lloyd Noland’s endearing eccentricities only really seem far more subversive to those stuck in the conventions of the mainstream jungle.

Though Noland’s appeal comes from his warped musical sensibilities; most of the melodies and core structures contained within the album are fairly accessible, reflecting an alluring fondness for classical music. It’s just that his arrangements are far more unusual and idiosyncratic than your normal or garden variety of music. The infusion of Noland’s avant-garde sensibility and experimental spirit makes for a fascinating combination, and very much is, what sets him apart everyone else. And I mean, EVERYONE else.

This album is literally packed with ideas and sounds, as Gary Lloyd Noland ventures into a different avenue with every track. The instrumentals have distinctive identities, and they’re extremely palatable in even in their most unusual forms. In 2021, you will definitely find less challenging albums, and maybe even more challenging albums, but you will never find anything quite like “State-of-the-Art Ear Exercises for Musical Cognoscenti Op. 119” anywhere else on this planet…maybe even in the entire universe for that matter!

ABOUT THE COMPOSER: Gary Lloyd Noland (a.k.a. author Dolly Gray Landon and artist Lon Gaylord Dylan) was born in Seattle in 1957 and grew up in a crowded house shared by ten people on a plot of land three blocks south of UC Berkeley known as People’s Park, which has distinguished itself as a site of uncivil unrest since the late 1960s. As an adolescent, Noland lived for a time in Salzburg (Mozart’s birthplace) and Garmisch-Partenkirchen (home of Richard Strauss), where he absorbed many musical influences. Having studied with a long roster of acclaimed composers and musicians, he earned a Bachelor’s degree in music from UC Berkeley in 1979, continued his studies at the Boston Conservatory, and transferred to Harvard University, where he added to his credits a Masters and a PhD in Music Composition in 1989.

A Touch of Charms – “We’ve Been Seein” – an all-embracing smoothness!

Little Moses Jones – “The Rain Came Falling Down” – the brilliance is in the groove!