Ni’kaiya Pettie known professionally as Fari X, is an American rapper, entrepreneur, and author. Born in Boston and raised in Boston, Oakland, and Atlanta, she became known as a...

Ni’kaiya Pettie known professionally as Fari X, is an American rapper, entrepreneur, and author. Born in Boston and raised in Boston, Oakland, and Atlanta, she became known as a public figure after the success of her body contouring spa and classes. The founder and CEO of The Relaxation Shop & Spa, Bawdy By Fari, Fari X Entertainment, and 11-17 Entertainment. She released two mixtapes – “Hoody Classy: Grind Season” (2012) and “Queenism” (2016), and now after long hiatus, the currently independent artist is back with a blistering new banger entitled “Queen Boss” ft. Bay Holla. Inhabiting a space where she can be as sexy, playful and powerfully idealistic as she want, the single is presented for everyone to get onboard with and find something for themselves within. 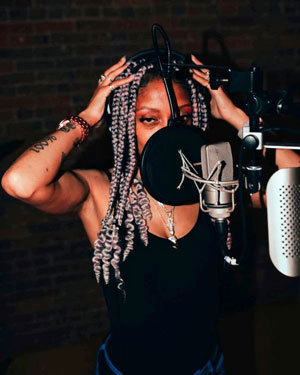 Fans will gravitate towards, and stick, with Fari X not only because of her talent, but also because she has a self-assured, self-empowering attitude that is required by women if they want to assert themselves in lob-sided, male dominated society.

Whether its money, love or sex, Fari X is in charge of her actions. She fully understands the meaning of pussy power, and has no problems embracing her sexuality or wielding it as a weapon. She’s takes charge of her destiny, not allowing others to dominate her ground.

A handful of other female rappers have been attempting to inhabit the same spot, but what puts Fari X above her peers and contemporaries, is her boundless creativity and focused vision. While others come off as indistinguishable bitchy twerking clones, Fari X truly sounds self-determined, absolutely aware, and in total command.

On “Queen Boss” ft. Bay Holla, the rapper sprouts with confidence. Hers bars drip with explicit imagery, and incredible grittiness, as she leaves her inhibitions at the door, and you never know what you’re going to hear next.

This track really spotlights Fari X’s flow – she’s great at subtly alternating her cadence mid-verse yet never losing her place on beat. And when Fari X passes the mic to Bay Holla, the vocals are just as impressive, adding an incredibly addictive lyrical bounce to the song.

From the start, “Queen Boss” ft. Bay Holla is exhilarating. Peppered with versatile, raunchy and undeniably catchy rhymes, this is an impacting single in every sense. And though the lyrics are outspoken and unfiltered, Fari X has the magnetism to sell it to a wide audience, due to her spontaneity of her delivery.

Moreover, the track shines because Fari X follows her inner impulses rather than global trends. Her versatility, witty lyricism, and animated delivery, will spark the interest of many. The artist’s attitude on the track is flawless. She spits fiery bars, deals out bold orders, and radiates with confidence throughout.

She’s both audacious and sexy. Her lyrical aesthetics are impeccably matched by the production of the record, while the partnership of Fari X and Bay Holla is perfect on this track – Fari X’s grittiness meeting Bay Holla’s urgency, beautifully.

In a year filled with some pretty bland releases, “Queen Boss” ft. Bay Holla possesses all of the elements to rise high above the noise. The track is taken off the upcoming album “XISM”, which took about 9 years to put together, as Fari X was going through mental, physical and spiritual growth.

“My objective was to create something that everyone can feel and relate to in one way or another. I had to make lyrics important again…” explained Fari X. “Queen Boss” ft. Bay Holla reaches beyond that aspiration, inducing the album to invoke even bigger ambitions. Keep your eyes and ears pinned on Fari X!

Styyle – “The Devil’s Problem” forges a series of ear-grabbing tracks!