The double-sided single “Messed Up”, backed by “Stay With Me”, demonstrates the lasting power of the many distinguished R&B traditions in the modern music idiom, and places singer-songwriter, August...

The double-sided single “Messed Up”, backed by “Stay With Me”, demonstrates the lasting power of the many distinguished R&B traditions in the modern music idiom, and places singer-songwriter, August Rayne, within them. Each of these songs displays a rich timbre that sets August alongside divas of the past. Hailing from Little Rock, Arkansas, she grew up singing in the church choir, and this single is without doubt a show of her pedigree. Old-school R&B virtues are valorized in a modern sonic evolution, without ever sounding retro or nostalgic.

There’s a sultriness and sense of vulnerable affliction on “Messed Up”, as it tackles life after heartbreak. It is what it is: honest emotional unloading delivered through a soulful voice, a melodic instrumental and, at times, self-empowering anecdotes.

Her knack for specifics and tailored delivery puts you right there beside her as the story unfolds. There’s something special about music that makes you feel things, and August Rayne excels in this department.

You’ll loved it from the first second and willingly drown in its mellifluous synth lines, delicately affecting vocals and cut-glass song-craft by Raven Simmons. “Messed Up” cements August Rayne’s place at the nexus of an extended group of independent artists pushing forward the notion that high-end art can be created from the most universal and well-loved ingredients. The multi-layered vocal arrangement and an understated groove is almost capable of inducing a trance-like state.

“Messed Up” is a record full of dynamic instrumentation and poetic lyricism that swells with emotion. The artist’s latest release demonstrates that August Rayne is just as innovative, nuanced, and brilliant as her most highly noted peers.

Her vision is further enhanced by the production executed by Renaldo “Fantasticks Steward. The ebb-and-flow progression of “Messed Up” keeps the listener intrigued all the way through, especially as it is backed August’s spellbinding vocals. 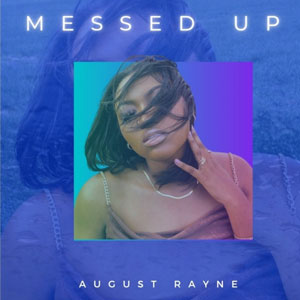 “Stay Wit Me” subtly switches the template, as it tells the story of a young woman reclaiming her power. Written by Raven Simmons, Ashley Smith, Renaldo “Fantasticks” Steward and Davion Newble, the track wants you to deeply feel every wave of rhythm as it hits you with throbbing basslines and shuffling percussion.

There is so much intention behind every piece of this track, from the beat to the lyrics. “I can have you if I want, but I don’t. I can take your heart and break it, but I won’t,” sings August Rayne. Her voice rides the bass-heavy beat with ease and it’s immediately clear she is, in fact, in her comfort zone when she’s making music.

Both “Messed Up” and “Stay Wit Me” are valiant efforts and distinctive from mainstream music’s consistently homogenized landscape. August Rayne’s ability to elevate R&B and Pop aesthetics into high art, illuminates her work, and that of her collaborators.

As a vocalist, August is rooted in using her voice in a nuanced and poignant way, showcasing the range of her register, while evoking the seriousness of her intentions. The double-sided single, “Messed Up”, cleverly unfurls and exposes its unforgettable charms to the listener, certifying that August Rayne is simply in a class all her own.

Paul Balancio – “Somewhere Somehow” takes you to places you’ve never been before!

Funkatears Electro – “Q16” sets up a musical journey into the depth of Surreal Electro bliss!