KG CWS – “PLAYAZ AMBITION” swings the hip-hop pendulum back, to yield a fresh new take on a classic format!

Kenneth “KG CWS” McGee is a Rap Artist, Producer and Engineer originally from Ardmore Oklahoma, but currently lives in Lawrence, Kansas. KG CWS has been booking his own shows...

Kenneth “KG CWS” McGee is a Rap Artist, Producer and Engineer originally from Ardmore Oklahoma, but currently lives in Lawrence, Kansas. KG CWS has been booking his own shows since the 90’s, as an independent artist and CEO of his own label Copin’ Wit Stress. He released his first double single Fargo/Real Hip-hop in 1997, and sold it hand to hand and on consignment, as part of the rap group CWS. KG CWS has since released 4 solo albums, and has also taken the time to back to college to get a degree in Business Management. He is back with his new single “PLAYAZ AMBITION” from the upcoming album “REZ-UH-REK-SHUN 2.0” due to be released on September 13th 2022. 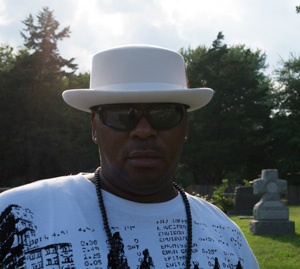 “PLAYAZ AMBITION” is the product of a master of his craft performing as well as he ever has. I suspect that KG CWS has a long track record of weaving together productions with crisp drum tracks and rhythms, while showing a penchant for adding a heavy dose of introspection to his lyrics, regardless of the topic he tackles.

At least that much comes shining through the core qualities of this track. Here producer GREENSCH from the Czech Republic, constructs a beat that is grandiose without being overwhelming, funky without being derivative, and classic without feeling dated.

KG CWS absolutely rides the beat and reminds the audience that he is a potent rhymer and technically efficient rapper, which of course reflects the time he has dedicated to his craft. KG CWS showcases a penchant for a more organic approach in which he intersperses rapid fire bars among periods of a more laid back delivery.

It’s moments like this, which truly make this a great track, because not only does KG CWS rap so well, but he does it so casually. For most of this recording, it truly seems that KG CWS has the world in his hands with his performance.

KG CWS definitely feels like the kind of rap artist I should have discovered earlier, but I guess now is as good a time as any. From the very moment “PLAYAZ AMBITION” kicks off, KG CWS manages to make his mark on the record, while simultaneously refraining from drowning out the production. This of course is vital to the track, as the beat really adds more of a gravitas to the record and empowers KG CWS, and the bars that he spits.

Many hip-hop tracks that top the charts these days share the same telltale signs. They have become all-too-predictable in major-label rap, with front-to-back overstuffed multi-producer tracks. Meanwhile, the underground continues to cook with concise and consistent rappers like KG CWS.

Moreover, KG CWS can be considered a veteran by now, and as such, brings along a rich baggage of experience and captivating old school values. All of which he infuses into the fresh of-the-moment groove, of “PLAYAZ AMBITION”.

The product of a deceptively simple recipe, the production, rapping and thematic ingredients “PLAYAZ AMBITION” brings to the table achieves near-perfection when combined. Beyond the mainstream’s youth-oriented constant chart chasing, KG CWS swings the hip-hop pendulum back, to yield a fresh new take on a classic format, and it’s downright thrilling!

Mark A. Smith – “Possibilities” is a spirited, charismatic and powerful album