Sometimes a few words can say it all. Rock. Electronic. Dark Wave. Industrial. Cinematic. Alternative. Listening to this record, those genre descriptions speak miles to Poke’s brilliance for molding...

Sometimes a few words can say it all. Rock. Electronic. Dark Wave. Industrial. Cinematic. Alternative. Listening to this record, those genre descriptions speak miles to Poke’s brilliance for molding sound, producing art, and their ultimate mastery of synth rock. Putting it all out on the table, their latest album “Manipulator” is easily one of the most intuitive and authentic records of its kind heard in the last few years. Poke is a musical project started in 2017 by music producer and sound engineer, Armando Doval, founding member of the band phoenix/NEBULIN.

Poke’s ability to seamlessly blend hard-hitting sonic styles, incorporate catchy hooks, blend expansive production and recording techniques, sing with passion, and write with creativity, makes some of their peers, and most of their contemporaries sound like amateurs in comparison. For an independent group, “Manipulator” is more of an achievement than mere words could describe. Right from the opening track, “Conspirator”, Poke bring their absolute A+ game.

The synths are thick and lush, the vocals shine gorgeously, while the momentum of drums and bass is jaw-dropping. The beauty does not stop there as there as Poke layer the instruments, and warp them into entirely different sounds and tempos. With Poke you get ingenuity on so many levels.

On one level, you have the production and the instrumental ability to create intricate and impactful musical arrangements. On the other level, you have tremendous songwriting and a singer with the ability to execute soaring melodies with effortless ease. 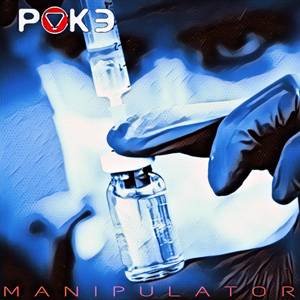 The title track, “Manipulator” is a perfect expression of these elements. Poke are also able to infuse a swinging groove into their productions. This happens on the progressive onslaught of “Pretender” which morphs into explosive sonic configurations.

“Abuser” comes out of the gate with slamming drums and twisting synths, steadily piling on bone-crushing riffs, which form a solid backdrop for the resonating vocals. The result is a much heavier, crunchier sounding track.

Practically every aspect of Poke’s musicianship, from the cutting-edge production, the visceral grinding riffs, to the vocal performance, is in the forefront here. However, what ultimately sells the album is the amount of variety that is represented, in each and every track.

“Killer” flips the template away from the monstrous heaviness for a few bars, while still maintaining a menacing tone and delivering a fiery guitar solo. “Deceiver” is an anthemic rollercoaster that thrives on flourishing percussion, driving riffs, and the high-flying vocals.

Poke utilize their vocal strengths brilliantly in this song, pushing through the furious instrumental with dramatically sweeping lines. “Sinner” concludes the album with buzzing aggressiveness, grit, and sheer energy. The dark and hectic atmosphere is also infused with reams of melodic ambiance.

This is a perfect example of an album that finishes just as strongly as it started out. In fact the final two tracks may just be the pick of the bunch for me. In summary, with “Manipulator”, Poke not only delivers a powerful and fulfilling listening experience, but they introduce probably the strongest work in their entire discography thus far.

The production delivers an explosive, cinematic synth-rock world, and tracks, that bring both memorable songwriting, and superb vocals to the table. I haven’t heard anything this fresh in a long time from the industrial and electronic rock industries.

Jashivo – ‘Just Follow Me’ finds a balance between catchy pop and chill EDM!