Grass Wolf – “Moonshine” is the raw and raucous sincerity of music

A key part of what makes Grass Wolf’s “Moonshine” album so enjoyable is the raw and raucous sincerity of the music. The band avoid the bullshit aberrations that most...

A key part of what makes Grass Wolf’s “Moonshine” album so enjoyable is the raw and raucous sincerity of the music. The band avoid the bullshit aberrations that most modern-day alt-rock pretenders are so keen to churn out, and do so without even thinking about it. This mysterious collective wear their influences on their sleeves, yet produce a sound that is fresh and peculiarly original — qualities helped emphatically by the band’s natural humility. Crunchy riffs, fiery guitar solos, banging drums and resonating basslines form the foundation for soaring vocals and surprisingly catchy melodies.

“Moonshine” has a rich selection of seriously mesmerizing tunes, with essential highlights featuring true rock n’ roll grit. Feeding off a host of tangled, overdriven, and dirty guitars, Grass Wolf lean into the opener “Tell Me Why” – a cover of the song by Penpals – with a thick crust of nostalgia. The mid-tempo groove, rolling drums and sticky vocals combine into something immensely likeable. It’s genuine, it provides just enough angst, and it doesn’t attempt to draw on needless melodrama.

Vaguely punk, vaguely old-school dance, and vaguely alt-rock, “Float On” rides in on a sweeping rhythm and jangling guitar motif, making the Modest Mouse cover just a little bit faster and dirtier, while maintaining the exact wit of the original. “I backed my car into a cop car the other day. Well, he just drove off, sometimes life’s okay. I ran my mouth off a bit too much, oh, what did I say? Well, you just laughed it off, it was all okay,” cites the lyrics. Sounds like the perfect day to me. 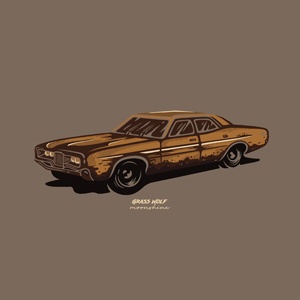 Grass Wolf also give The Beatles classic “I Am The Walrus” a complete makeover. The project puts the rock into the psychedelic template with crushing guitars and rumbling basslines driving the relentless melody, which is superbly and diligently executed.

It is a bona fide style, one that is so unique and far removed from the currently in vogue alternative scene. It’s catchy and explosive, centered around the truly infectious Lennon-McCartney melody.

“Escape From the City” from the Sonic Adventure 2 Soundtrack, gets a funky restyling from Grass Wolf. They ease up on the angst and infuse more groove into the arrangement, making the song breezier and warmer on the ear.

Grass Wolf also put more shine on the lead melody, as well as expand the guitars into a wall of sound that is thicker and sweeter. This to me sounds like a serious improvement on the original track, but it’s a question of personal taste, I suppose.

“Paranoia is in bloom. The PR transmissions will resume. They’ll try to push drugs that keep us all dumbed down. And hope that we will never see the truth around (So come on),” are the opening lines to “Uprising”, a single taken off the 2009 album “The Resistance” by UK super-group Muse.

Grass Wolf replace the smoother synths with their loaded guitars and dig into the arrangement with a vengeance, simultaneously inviting you to sit back and reflect, as well as singalong and bounce around with purpose.

Grass Wolf and “Moonshine” might just pave the way for a lot of people to discover, or rediscover some pivotal, previously released tracks. Along the way, they also get to show off their own playing, singing and interpretational skills, resulting in a tremendously enjoyable listen, and a clear desire for a set of forthcoming originals.