Singer, songwriter, rapper and producer, Úlf Lehmann aka Vonsoh wears different hats, and has many spent years, working with a variety of artists and projects.  One of his most...

Singer, songwriter, rapper and producer, Úlf Lehmann aka Vonsoh wears different hats, and has many spent years, working with a variety of artists and projects.  One of his most recent albums, “Q16”, released by his Funkatears Electro project garnered critical acclaim within the underground industry. Now he bounces back with a brand new 14-track album, entitled “Alternative Pop Art” with his FunkatearsMuSIC project.

This is an unexpectedly successful record perhaps, but definitely a deserving assortment of charming alternative numbers. And for alternative, I mean, alternative rock, alternative pop, alternative rap. On this album, Vonsoh grabs a bag full of genres and sonically twists them into an alternative something. Can such a genre-hopping record work, without creating a shambles?

If your name is Vonsoh, and the project you are in, is called FunkatearsMuSIC, then yes, it can work, and wonderfully too. The admittedly drastic intention of making a record of songs he wanted rather than a formulaic album that follows the conventions of most popular albums is quite an admirable one. The sound is big and polished, yet gritty and raw.

Vonsoh looks out through a high-powered scope into a creative alternate universe, composing tracks with the most disparate sounds and rhythms. Growling electronic basslines, slapping drums, jangling guitars, and shimmering keys, join barking dogs, whistling and other field recordings, in the pursuit of groove and sonic and witty storytelling, which is mostly in German. 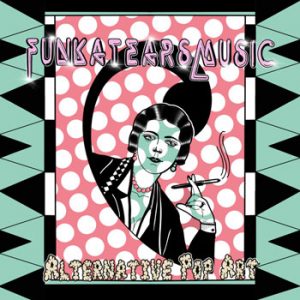 Vonsoh also calls in a number of features who add extra layers of dynamic bliss into the record. He is helping lead a renaissance in a kind of surrealistic sonic world, where he operates a masterclass in curation and manipulation of music. That genre-blended approach is what makes Vonsoh stand out within an increasingly crowded field. FunkatearsMuSIC make the music they want to, and the results are both creative and satisfying.

“Plattenbau” (Remix FunkatearsMuSIC) features a set of warm keys, and an urgent rhyme scheme on the top. “Bobby” features a barking dog who sticks perfectly to the rhythm, but many tracks on here have their own unique defining elements, which are used in surprising ways. “Zugvoegel” flows in full rap mode, awash with driving percussion and strummed guitars. “Dat” brings a darker sonic template with a rumbling bass and a down-tuned vocal.

Whatever your preference in mainstream music, there are thousands of artists releasing high-quality tracks that are just waiting to be discovered and thrown on your favorite playlist. However, if you’re looking for something different, the choices less easy to find. Vonsoh has always been an artist in pursuit of innovation, and his latest album with the FunkatearsMuSIC project, only furthers the proof that he is an important voice in the scene.

Levi Lee – “Outlaw” captures the epic nature of his voice!