JV & TEEJ: “Turn It Up!” is delivered it with so much style and groove!

Friends from an early age, JV & TEEJ both believe what they’re doing is “more than rap, it’s music on a mission,” and with that, they donate a portion of...

Friends from an early age, JV & TEEJ both believe what they’re doing is “more than rap, it’s music on a mission,” and with that, they donate a portion of the proceeds from album and clothing sales to the City Mission Back Pack Program. Their role in the community on top of their rhymes has led them to appear on Albany Broadcasting, Fuse TV and landed them guest spots guest hosting a local music video show, CR6; a throwback to MTV’s TRL. On top of all their appearances, JV & TEEJ have also played with pop acts like Natasha Bedingfield and Sugar Ray, to hip hop and R&B favorites Coolio and City High. With a couple of releases under their belts, JV & TEEJ are back with their brand new single release entitled, “Turn It Up!”

JV & TEEJ’s feel-good lyrics on “Turn It Up!” aren’t anything new in hip-hop, and to tell the truth I was just waiting for these ‘too cool’ rhymes to all come crashing down. 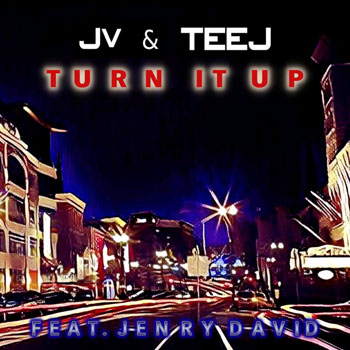 However, when that event never occurred, I was just setting there scratching my head, wondering how the hell did they just pull it off? They delivered it with so much style, groove, and attention that if they were reading the phone-book out aloud I would have been thrilled to hear it.

JV & TEEJ’s lyrics and flow make this track good, as does the phenomenally sung soulful hook over the funky dance-club beat. The hip hop scene has changed massively since its early days, but this thing reeks of that grooving old school vibe, that just won’t stay down.

If you want to be a full-fledged star in today’s rap world, there are a few prerequisites. First, you should have a compelling story: you were born in the projects or a trailer park; you’re a former drug dealer and/or addict; you’ve cheated death on numerous occasions.

You also need to start or escalate a feud with a well-respected artist in order to draw attention to yourself. And of course, no hip-hop star worth his or her salt would dare step into the public sphere without the usual adornments: excessive jewelry, their own signature apparel and, most importantly, a crew of friends standing behind them.

JV & TEEJ’s leave out about 95% of the ingredients in the aforementioned formula, and still retain all the requisites to make you sit up, take notice and nod your head all the time while you’re doing it! The beat is hauntingly addictive with its harmonic piano loop, and it’s blissful rolling bass.

Add in, the steady party-planning lyrics, rapped with heartfelt and perfect execution – and you can’t ask for too much more. One listen at full volume, is all it takes for “Turn It Up!” to leave a lasting impact. You might as well get the party started with this thing!

Steady Work: “Identity Theft” – This is a real life record!

Stephen Edwards: “Requiem for My Mother” – full of gravity and importance