Vjeran – VJ (meaning faithful in Croatian) aka Dobie is undoubtedly one of the most prominent, catalyzing forces behind the underground trance movement. The veteran Croatian producer born in Zagreb seems...

Vjeran – VJ (meaning faithful in Croatian) aka Dobie is undoubtedly one of the most prominent, catalyzing forces behind the underground trance movement. The veteran Croatian producer born in Zagreb seems to have been around a while now, with an illustrious number of releases to his name – a tenure which can feel like a lifetime in dance music years. Dobie’s evolution as a producer has been evident and fluid, with each passing release serving as a landmark in his journey. However his latest track, “My Everything” (Summer 2017 Remix), is perhaps his most bold undertaking to date, as it transcends the barriers of traditional trance confines and delivers a more wholesome, well-rounded package to fans.

Beyond the concept and execution, what elevates “My Everything” even further is the way in which the record serves as a portal into the seasoned producer’s psyche; a true labor of love that showcases his willingness to constantly innovate. What instantly distinguishes this summer feel-good anthem is the tracks astute usage of melody. Not only does this serve as a major differentiating factor with concrete marketability, but also gives the track a definite story line, making the process of listening to the track a significantly more immersive and enjoyable experience. 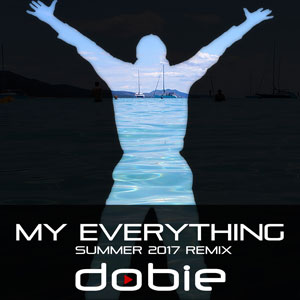 Another highlight within “My Everything” complexion is Dobie’s choice of slipping in a vocal section only at the very end of the track– a soulful one-line hook neatly delivered by singer Nikki. In examining the actual music, an intriguing aspect of the track is how it is anchored to a mood.

A feeling is cemented within the listener by use of expertly constructed bass, synth and piano dialogue. This concept is a bit of a masterstroke in itself, sparking the listener’s imagination and curiosity and thus ensuring audience engagement as the track progresses.

Dobie has paid close attention to nailing the track’s other-worldly sound design. The meticulousness weaved into the drums and chord progressions are immediately apparent, making the song supremely enjoyable and easily one of the Dobie strongest offerings. Its uplifting undertones are capable of raising the energy levels of any dance floor; a sonic characteristic mirrored by most of this producer’s work.

“My Everything” also features its fair share of powerful, driving rhythm. A quintessential trance cut, this falls into the category, featuring a heavy bass line and quintessentially euphoric synths, perfectly suited for large, open venues due to its infectious energy and atmospheric bass.

Dobie has always tried to push the boundaries of the genre by combining different musical elements and genres to create something magical. His tracks always have a story to tell. “My Everything” (Summer 2017 Remix) is truly an exceptional one that captivates the listener immediately.

Delta Station: “An Unexpected Turn of Events” – an aural delight

Barrett Staples: “That Yonder” – an amazing project with no downsides