It’s no surprise that a Christmas song – Bing Crosby’s “White Christmas”– is in the Guinness Book of World Records as the best-selling single ever. There’s a universality to...

It’s no surprise that a Christmas song – Bing Crosby’s “White Christmas”– is in the Guinness Book of World Records as the best-selling single ever. There’s a universality to Christmas music that even transcends religion. Even Bob Dylan, who was raised Jewish, loved Yuletide tunes enough to record an album of them in 2009. From classical and jazz, to gangsta rap and reggae to indie-pop, from crooners to rockers, the impulse to knock out a Christmas song knows no boundaries.

If you’re looking for actual, traditional Christmas music, you couldn’t do better than the rich, fascinating album “Toyland” done by pianist extraordinaire – Chris Nole. The album’s liner notes faithfully declare: “Pianist Chris Nole celebrates the sounds and enchantment of Christmas with Toyland. Infusing traditional melodies of the holiday season with imaginative new arrangements and chord voicings, Nole takes these popular songs to another musical realm with this moody collection of instrumentals.” And that description couldn’t be closer to the mark.

Filled with his distinctive, emotive playing, it contains ten traditional favorites. From soft and gentle to powerful and all-embracing, Nole’s signature and unique arrangements complement these traditional classics. Probably inspired by his Christmases with his family growing up, these songs have the warmth and feel of a cozy fire – inviting and comforting.  And for all their subtle creative brilliances and original voicings, the songs are never challenging to the point of annoying or boring the listener – A rather ominous task for an instrumental piano album. 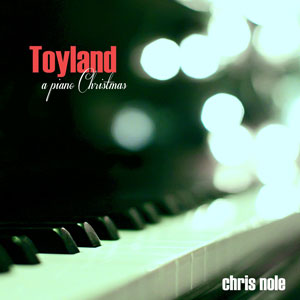 There are usually at least a few carols in most Christmas collections that just don t feel right, but this one has no fillers or near-misses – it’s excellent from the first note to the last. Chris Nole injects enough new wrinkles through his interpretations and arrangements that this is no mere shopping mall background soundtrack, as evidenced during the first track, “God Rest Ye Merry, Gentleman”.

If you are like me, simply listening to Christmas music can help one transition into the holiday frame of mind. And while everyone has their own individual pace for getting into the Christmas mood sooner or later, you can always depend on holiday music to renew your Christmas spirit.

Few interpretations achieve the above affirmation better than “Hark! the Herald Angels Sing” and “O Holy Night”, especially when revisited and reworked with such eloquent beauty as Chris Nole displays here. He brushes off all of the expected pedantic weariness in arrangements that have traveled a timeline of centuries.  Although the songs are all instrumental, they evoke emotions of joy and contentment, so much that lyrics are not even necessary.

“O Come, O Come Emmanuel” is a very haunting, yet mysterious song with dark string interludes and subtle percussion that definitely captivates the listener. Nole again displays his celestial piano talent in this song as it smoothly tells a story of its own. The listener may find themselves getting lost in this song and replaying it over, and over again. As I did, finding this to be probably the best interpretation of the entire collection.

But there is more. Songs like “Joy to the World” and “In the Bleak Midwinter” are powerful songs that takes you so deep into the music, it feels as if you were sitting next to Chris Nole as he plays them. These are truly moving tracks with butter-smooth transitions and flawless piano playing that leaves you wishing the songs were at least twice their length. A welcome deviation from most instrumental offerings in this genre “Toyland” is graceful and delicate, but deeply emotional and highly original.

Andy Oliver: “Sometimes it’s Better in the Movies” – an authentic troubadour from a purer time!

N0va: “Lessons and Blessings” – huge, ambitious, and easily one of the best mixtapes of 2017