ALPHAMAY: “The Mellow Collie” – hypnotizing and entrancing with every syllable

For the last five years, the ranks of ALPHAMAY`s fans have been growing constantly. This is not only due to their continuous musical output but also to the many... 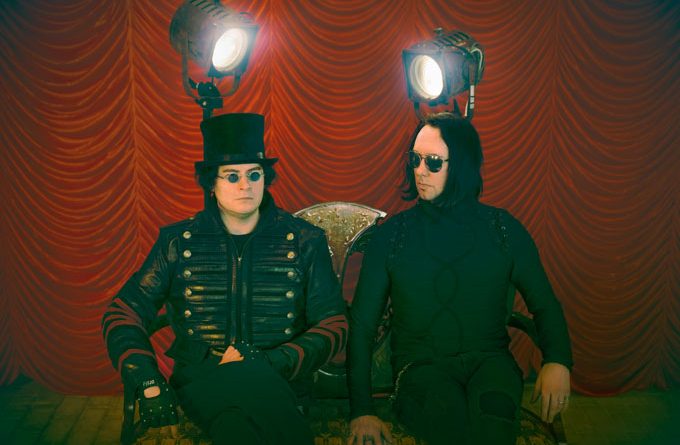 For the last five years, the ranks of ALPHAMAY`s fans have been growing constantly. This is not only due to their continuous musical output but also to the many live shows the band has performed in Germany and abroad. The project, made up of the duo Cris Frickenschmidt and Henning Hammoor, also picked up two awards at the 34th German Rock & Pop Awards: ‘Best Electropop Band 2017’ and ‘Best Gothic-/Wave Band 2017’. On May 11th the band released the 5 track “The Mellow Collie” EP via the Battersea Electric label. Close your eyes and you’d think we were back in the good old days of the concept album. The desolation, the angst, and the melancholy is all here. This recording shows ALPHAMAY pulling out all the stops and doing what they do best: making cutting edge, state of the art, dark electronic music.

The opening lament of Hammoor’s baritone on ‘Black Parasite’ introduces the recording in a forceful way, before smoothly flowing into a smooth and ominous bass synth groove. This track which is also the first single lifted from the collection, has an addictive production due to the deep resonant vocals and nice harmonic touches in the choruses.

In a day where popular EP’s and albums seem to lack any depth or emotional substance, “The Mellow Collie” is a welcome relief with 5 fantastically crafted productions forming a recording that seems to be adrift of any real weakness or low points.

It has a wide range of typical darkwave and synthwave characteristics; it’s somber at times, eerie at others. On “Low in Love”, Henning Hammoor swoons and careens his vocals, hypnotizing and entrancing with every syllable. This is one of those recordings that you put in, hit ‘Play’, and let run from beginning to end.

For me, it’s a journey of beautiful nebulous tones, unsettling melodies, and flat out excellent music. It’s one amazing song after another. Cris Frickenschmidt makes sure there are subtle tones and sounds in the background of every song, creating an air of mystery and anticipation, permeating the track from within.

It takes multiple listens to begin peeling back these layers and exposing the darkness contained inside but the trek is a magnificent one. There are few EP’s or albums where I feel that I hear something new every time I pop it on but “The Mellow Collie” is certainly one of those.

There is a depth and texture to the music that feels warm and safe, notwithstanding the aphotic nature of it all. By the time “The Carousel” sets its tone, it is clear that this isn’t music built on loud, abrasive noises, provocative hip shaking beats, or the need to impress troubled teens.

It’s about intense, interesting stories that rub and react together to create bewitching thrums and knots of eerie musical allure, the powerful but emphatically restrained vocals, and electronic musical beds providing all the needed drama.

This is music to revel and listen to, again and again – “Love Must Die’s” fidgety, compelling bass and drum beat, the interesting flourishes of synth builds, and the twilight haze of vocal overlays pushes the choruses. There’s balance and counterbalance and everything works just beautifully.

Each musical bar avails itself of an element chosen from a range that may include retro industrial, to contemporary synthwave, and avant-garde sonics. The closing track “Wintertime”, probably has the best vocal arrangements on the entire EP.

When the sublime melody rises above the gloominess of the words, when the elevated vocal raptures presage, the song falls into stirring heartfelt melodicism where it really belongs. Listening to the instrumentation, perhaps this is also the track with the best aural dramaturgy and dynamics in the collection of songs here.

Musically and vocally, there is plenty going on in “Wintertime”. Though it is fair to say that stellar songwriting and production infect every song on “The Mellow Collie”. It’s really hard to ask for more from a band that will exceed everyone’s expectations with this latest release.

Vernon Little: “The Chance To Tell You” – a spiritually enlightened, conscious and fully matured artist

Kenric Carson: “Thank You, Praise You” – a tremendous worship record!