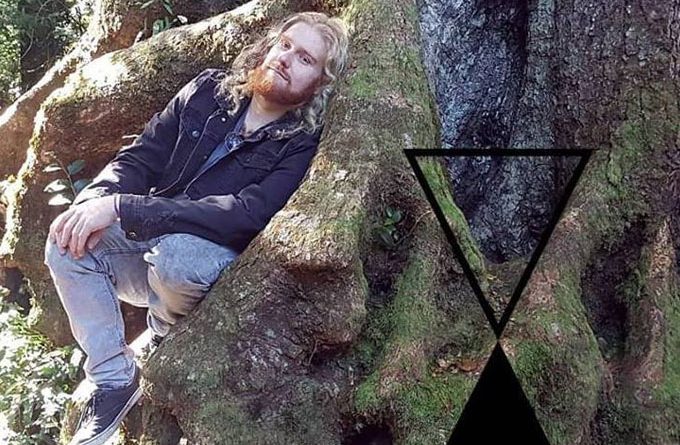 A graphic designer, singer, guitarist, keyboardist, songwriter, performer and mastering engineer – Cask J. Thomson aka Cask, was born in Scotland and now lives in Australia. The progressive rock musician recently released his self-produced 14 track album entitled, “Life is a Terminal Illness”. Since the late ’70s, I’ve been listening to hundreds of new groups and recordings, trying to capture that feeling of sitting down with something that took me on a journey to a higher place where musical genres and boundaries melted away for the greater glory. Rare albums like those were addictive for me, requiring many listens to unravel deeper mysteries and joys, always the special draw of the best progressive rock for me.

This Cask album is one of very few to succeed fully in a similar way and on virtually every level for me. I realize how much I’d missed sitting down for a spell with such engaging music that shines from that captivating higher place. Every element here seems just right, flowing seamlessly, and the world suddenly seems better.

Hard to describe such music without sounding a bit unhinged with excitement, but that’s the feeling I get from “Life is a Terminal Illness”. Trying to explain exactly why the album stuns me would be an overwhelming task. Suffice to say that the masterful balance of composition, musicianship, and production strikes me most of all, with a special nod to the arrangements and songwriting throughout.

The insightful lyrics, the dynamic instrumental excursions, the shifting loud and soft backdrops, and the constant attention to the swing of emotional highs and lows, are all coming from that great place above. Every note and beat matters here.  And this is no glossy overproduced soft underbelly progressive rock album.

Instead Cask often goes in hard and raw with musical sections that border on bone-crushing progressive metal as can be heard on “Drowning in March” and “Heavens First Redemption”, though he can tune it down with more expansive and sensitive recordings, like “Throwaway” and “Unfaithful”.

Though he sounds best, when he is somewhere in the middle of the two. Like on the slow burning melodic ballad “Mistress Part II: See What Tomorrow Brings”, or the mid-tempo swing of “Wondering Forever”.

Cask’s music is a swirl of influences that he molds into his singular and original sound. One needs to understand that this is prog mixing in contemporary musical trends effortlessly with Cask’s influences. The music flows well and is intelligent from beginning to end.

Cask even found space for a song called “This Christmas”, though it has a deep melancholy aura attached to it, and far removed from your usual type of fairy-tale Christmas tracks. The story will haunt and stay with you for more than a little while.

The acoustic guitars roll out on the intro of “Mistress Part III: Happier Without Me”, but just until the introspection turns to anger. Then the six-string electrics set in to rip the track apart. Cask is not afraid to approach new territories with his music. He’s a deep thinker, and while the idea behind this album seems dark, the musical texture is simply beautiful, juxtaposed with slow sparing arrangements and shocking, progressive, and hard-rocking jams.

Sometimes all in the same song. A prime example of this would be the epic 14 minute track with an alien twist, “Messengers Part I: Sands of Karanis”. This one’s very Pink Floyd-ish in places, and a bit like A Perfect Circle in others. Great drumming and monstrous guitar riffs drive this track. The song “Forgiveness” is soul crushingly sad and beautiful for me, and a stunning way to end this album.

Track after track, on “Life is a Terminal Illness”, Cask certainly proves himself to be a master composer, arranger, lyricist, performer, engineer, and virtually every other role that applies.  “Life is a Terminal Illness” is likely a recording he’ll be remembered for, a milestone in his career, the moment his many roles and skills merged into something larger and all-embracing. At least that’s my take, after two weeks of totally addictive listening. Strictly through headphones!

***NOTE: The Album was recently featured on NativeDSD in high definition DSD format and was recorded using one of the highest resolutions available in the digital audio age – info is at https://audiodefine.nativedsd.com/albums/ADCLIATI-life-is-a-terminal-illness

***SPECIAL OFFER: Readers can get any of Cask’s albums or tracks at 20% off, by using the code “tunedloud”. Enter the code during checkout at his official Bandcamp store – www.caskcamp.bandcamp.com

Solon Z: “A Wish For Christmas” is essential to set the mood