Minneapolis based Doug Collins & The Receptionists are made up of Doug Collins (vocals, guitar), Chuck Varley (bass, vocals) and Bill Dankert (drums, vocals). Doug’s roots pop sound is embedded in songs that sound happy, but are usually sad. Hence the title of the album “Good Sad News”, which was voted #3 best American release in Spain by Ruta66 Magazine. Doug Collins makes music in the service of humanity, with a kind of honest and plain-spoken poetry. His is a voice we need and an engagement with spirit and empathy we need even more. The challenge for someone like Doug – the guy who can do everything from write to sing to play a scorching guitar – is to find a way to bring it all together. Over the course of the last couple of years, he has done that, and here he is, fully formed on his latest album. Temperance and perspective have helped. Let’s be blunt about that. Doug Collins knows who he is, musically as well as personally. And it all flows out across this album.

“Good Sad News” is a twangy, folky, country, poppy, and vaguely rock n’ roll-type thing that is hard to categorize. His band enhances this record, but Doug’s songwriting is the key. In a world of auto-tune and pitch-perfected records being literally vomited out by the corporate labels, I literally feel blessed that we’ve got Doug Collins keeping our feet grounded in real, honest-to-goodness music. There’s only a handful of truly talented folks still making records with this classic roots flavor, and Doug ranks the very top, period. 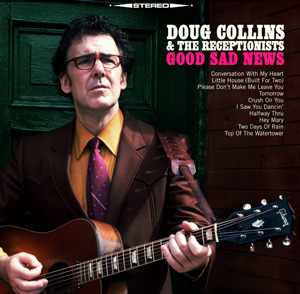 Right from the opening upbeat track, “Conversation With My Heart”, this record offers up some very tasty, tried-and-true sounds, which work perfectly. “Little House” (Built For Two)” bounces with energy, while the tender “Please Don’t Make Me Leave You” shows he’s not even close to exhausting his capacity to craft a ballad.

“Tomorrow” and “Crush On You” manages to combine a modern pop sound with a solid musical underpinning from the past. This is a sound we’ve heard before but recorded with a freshness and verve that uplifts the listener.

The intoxicating thing about this album is that the songs are able to transcend the painful realities of melancholy and heartbreak, with an honest and hopeful sound, which contrasts the afflicting lyrics. This sensation is so evident on poignantly beautiful songs like “I Saw You Dancin’” and “Hey May” – two of the best cuts on this records.

The organic instruments and elegant arrangements create lush, heartwarming soundscapes. Another standout, is the rocking, “Top Of The Water”, with its driving guitar rhythms and rich harmonies.

Doug Collins & The Receptionists are the freshest sound to emerge from the nexus of folk, rock and country in many years. Doug’s music is articulate and rocking, simple and yet able to present complex ideas; rooted in the past with his eyes and heart fixed firmly on the future.

The idea of a homespun artist like Doug Collins being ready to eclipse any number of corporate megastars in his field of scope, may sound somewhat far-fetched to the uninitiated. But to the rest of us, the perception of his rootsy authenticity is hugely aspirational.