The music envelops you, cascades over you, but does so without being overwhelming or giving you sensory overload.

“Kelly” is a very adventurous, stylistically diverse, late ’80s funk and early 2016 pop track. Well actually it’s a sum of something that sits between all those years. It has grooves that actually move and a lush instrumental that is impressive. Loaded with a nice beat and a great hook that goes something like “…Kelly, Kelly, Kelly, Kelly, Kelly, Kelly, pick up the phone…”, this track is an excellent showcase of what Sidecar do so well. And that is, strong, punchy and superbly confident pop songs with conventional melodic structures which allow the masses to sing-along without embarrassment or hassle. 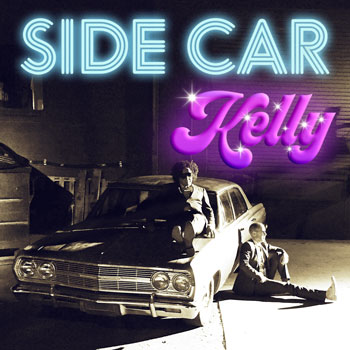 Echoes of the past slip and slide through the verse and choruses; the sound however is distinctly their own, with moments of great tenderness and joyful exuberance which can be heard in the spotless vocal harmonizing.

The music envelops you, cascades over you, but does so without being overwhelming or giving you sensory overload. Once you hear “Kelly”, you’ll never forget it! It’s intelligent without pretentions; it’s lush without over-production, while it’s simple and complex at the same time – a very long way from many current overworked and contrived musical productions.

“Kelly” is funk, it’s pop, it’s soul it’s alternative – it’s the jam. For those who enjoy music that defies the current standard radio and TV classifications, get this recording. I strive to find music that breaks the chains of commercial categories, in my first listening to Sidecar I knew I had found something different and akin to most late 70s, 80’s early 90’s pop music.

Yet at the same time Sidecar break away from the dirty stigma that pop holds. It is a shame that groups like this hardly get the credit or acclaim they deserve from the masses. Sidecar is a project of individuals, gifted enough, and brave enough, to make the music they want to, regardless of which trend their current musical era is confined to.

The instrumental approach is consistently and harmonically full, while the playing is fluid, slick, clean and very expertly done. Moreover, besides the modern electronica twist, it’s the band’s musical personality distinctions that really make this song work so effectively with what they do.

Tristan Thompson: “Love You Can Believe In” – positively buoyant performances!

Setto: “Fvck With Me” produced by KashBeats