Free From Gravity: “Saints and Sinners” is an exceedingly strong rock record! 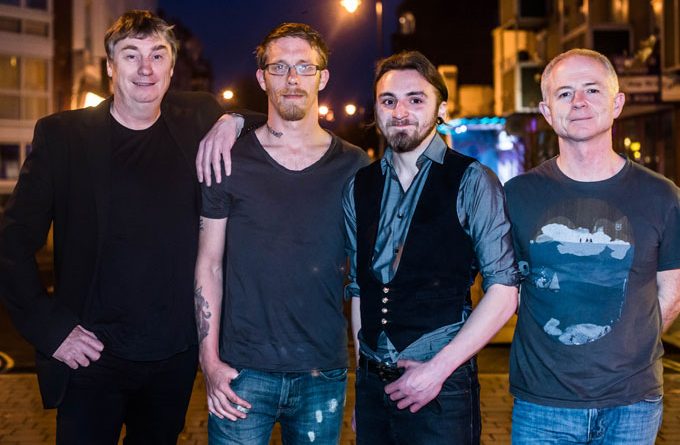 Free From Gravity are a 4 piece Rock band out of Portsmouth UK who play a style of music they call “Kick Assed Chilled Out Rock” – that’s Soft Rock With Attitude. The band is Vince Barnes (Lead Vocals, Guitar), TJ Jackson (Drums), Lewis Trickett (Bass) and Andy Oldfield (Saxophone, Keyboards, Backing Vocals). The UK band live up to their name as they sonically swoop onto the music scene with their debut EP “Saints and Sinners” which is set for release in August 2016. This is simply one of the most compelling soft and melodic rock bands in recent memory. Yes, their sound is highly derivative of earlier, legendary rock music, but it’s brilliant and filled with the same gripping melodies and harmonies, all but lost in today’s artificially produced music. Free From Gravity deftly combines elements of 60s and 70s rock but adds touches of more recent rock for a fresh sound.

Vince and the lads put everything together so well that it’s almost impossible to dislike this EP, no matter what your taste in rock. Judged on its own merits, “Saints and Sinners” is an exceedingly strong rock record.

Of course, Free From Gravity faced the tremendous challenge of following up their previous releases like, “I Have A Dream” and “The Long Road”, as well as standing apart from the other raft of similar retro-rockers the world has unleashed upon us in the meantime. But the band comes out trumps with this EP, firmly establishing their own identity and sound in a monumental way. And the proof is in the pudding from the opening notes of the first track, “Crazy Lady”. This, for me, is probably the finest track Free From Gravity has ever recorded, and the best possible introduction to their music for any newcomers.

They could not have chosen a better opening track – melodic, powerful, great vocals and more importantly, instrumentally an absolute rock gem.

Free From Gravity draw upon, and nick everything that’s good about rock-n-roll – a bit of swagger there, a pinch of pub sing-along chaos here, couple that kind of stuff with an energetic, back to basics rock record, and you get music that will definitely please the rocker within you the whole way through.

I mean how could you possible not sing-along to the harmonies in “Dance With Me”, or play your air guitar to the crunching riffs of the title track “Saints and Sinners”? From the pure melodic energy of “Step Into The Sunlight” to everywhere before and in between, these guys know how to write good rock songs.  Their influences ring loud and true on this EP, and boy do they have all right ones!

Vince Barnes’ voice is perfect for this music and sounds tremendous the entire time. It’s been pointed out in other reviews before but I can’t help making a nod here. On the other side of the coin, TJ Jackson, Lewis Trickett and Andy Oldfield make sure that Vince’s voice is supported with just the right riffs and rhythms.

The end result is truly a great EP to just throw in and enjoy without over-analyzing or thinking about too much. Free From Gravity is one of the best band’s within this genre to come along in the last five years, and “Saints and Sinners” proves that beyond any reasonable doubt! MORE ABOUT Free From Gravity: After re-releasing their debut single, “The Long Road” on April 5th 2013, they went on to play the renowned Bedford Live in London. As a result Free From Gravity were invited to play at a number of festivals in the UK such as WillowFest, Viking MC Rally and the Hoefest.

The band has a full schedule of booked dates ahead and will also be performing some guerrilla gigs. The exact location of these gigs will be kept secret and announced on the band’s Facebook page an hour before kick-off time, so like their page and keep up to date with what’s happening, when and where.

Free From Gravity have completed their debut EP “Saints and Sinners” which is set for release in August 2016 with singles being released every three weeks leading up to this.