What makes the “Trunk Baby” single, by Tommy Trillz, appealing, is that it fees fresh, like a few of guys – well ChrisCoolZ & Trazy Snake feature here too...

What makes the “Trunk Baby” single, by Tommy Trillz, appealing, is that it fees fresh, like a few of guys – well ChrisCoolZ & Trazy Snake feature here too –  just hanging out making music. The track has been tweaked by producers Young Forever x Ryan Mota to resemble a slow, head-nodding summer beat, and the melodic hook seems to have the same intention.

The single follows an introspective story and a meaningful theme about wanting to come out in the open and staking your claim in life. “Trunk Baby” is a catchy pop-styled rap track obviously meant to attract a bigger audience. 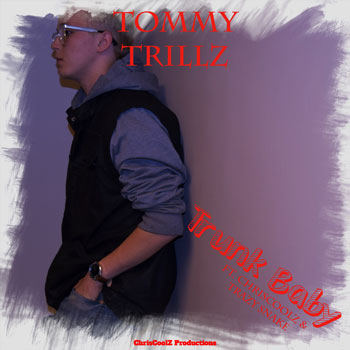 Tommy Trillz has a unique voice, however him and this crew still sound very young, and Trillz may not yet carry the rawness which real die-hard hip-hop fans are looking for, but he is currently locked into the very young listeners niche, for which he will be just fine right now.

If apart from Tommy Trillz personal statement about affirmation, the purpose of “Trunk Baby” (Ft. ChrisCoolZ & Trazy Snake) is to create a banging party buzz, then it most certainly succeeds.

The majority of Hip Hop that reaches the radio and sells well to the masses, is either a rapper laying down three slick verses in-between a catchy, sung hook; or an R&B/Pop singer sticking a popular rapper on the end of their club joint.  This track comes up shining on the first premise.

Tommy Trillz, ChrisCoolZ and Trazy Snake undoubtedly have some chemistry going on, as proven on this track with their interchanging flows and hooks. Riding on a solid beat, the snappy rhymes complete the atmosphere and the choruses fit well.

The lyrics too, are pretty clean, except for a handful of “motherfucker” words, which are probably the minimum amount required, if you want to sound ‘real’! Trunk Baby (Ft. ChrisCoolZ & Trazy Snake) is direct in its lyricism and easily accessible in its overall flow and message, which allows the track to establish a quick connection between the song and the average listener.

This project is primarily made up of the prevalent Hip hop sound out now. The single is delivered without any overblown epiphanies or misdirected hype, which helps the song endear itself to you without any preconceived ideas.

Though, from what I can gather, this is a very young artist starting to get his artistic wheels in motion, Tommy Trillz’s dynamism and freshly candid rapping attitude comes to the fore.

Arcadia: “Love” doesn’t hold back on introspection and sensitivity