Roberto Fasciani is an Italian bass player extraordinaire with a wealth of experience that goes from performing and recording, to teaching. Fasciani who graduated from the Percentomusica di Roma,... 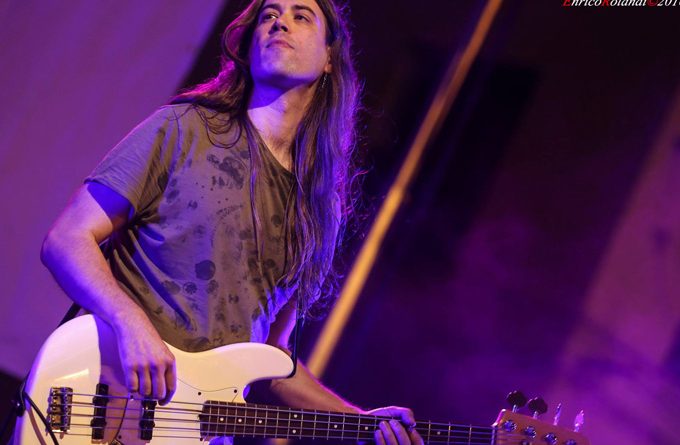 Roberto Fasciani is an Italian bass player extraordinaire with a wealth of experience that goes from performing and recording, to teaching. Fasciani who graduated from the Percentomusica di Roma, after completing a 5-year course, began playing bass at the age of fifteen, because he could have a drum set. He has since carved out his professional career  by collaborating and performing with the likes of Graham Oliver (Saxon), Leon Hendrix (brother of the legendary Jimi), Fabio Frizzi, Orchestra Nazionale, Novembre, Marco Conidi, Ilenia Volpe, Dogmate, AIIR, Pino Liberti, Fulvio Feliciano, Nicola Giannelli, Steel Seal, Hydra, Echoes of Sound, Dunwich, Aenema, JS, Black Stars and Vatna Jokull among others.

Moreover he has participated in many competitions and seminars while perfecting his craft, and also plays with numerous bands, including Fabio Frizzi F2F, Ilenia Volpe, Dogmate, Blue Experience with Fulvio Feliciano and Pino Liberti, as well as Los Bastardos.

In fact, Dogmate will release their sophomore album in April, while there is also high anticipation for the debut album from Los Bastardos, which is expected to drop before the end of the year. Fasciani who specializes in classic and progressive rock, also teaches jazz, funk, Latin and pop at various music schools.

Roberto Fasciani is what we can call a progressively minded teacher who divides his courses between ‘custom’ and ‘random’ methods – where students can choose which topic to study. He is currently preparing the publication of his own personalized method, entitled “Rhythmic Studies for Electric Bass”.

This method is specifically aimed towards the study of tempo and the rhythmic divisions found in music. It will be divided into 3 sections – Solfège (Syllables are assigned to the notes of the scale which enable the musician to mentally hear the pitches of a piece of music) – Creation of Grooves and Fills starting from defined rhythms, and Original Song Scores. 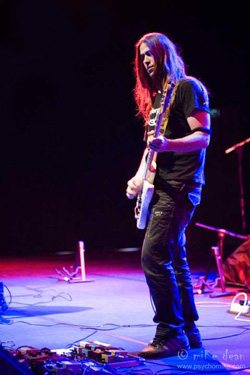 The average music listener pays very little attention to bass and what it does for the music they are listening to. Bass is probably one of the most misunderstood instruments, and bass players constantly struggle to get credit from non-musicians who don’t understand bass.

So the very first things bass players learn are to be patient and humble and to not let underappreciating get them down. Of course this also gives bass players one of their biggest advantages — the ability to surprise people. When people have an assumption that bass is boring, or not very important in music, it gives players like Roberto Fasciani the chance to prove them wrong.

Dexterity and virtuosity are important in music, and often, Roberto Fasciani’s progressions sound like devilishly clever and tremendously difficult routines. But he also knows when to pull back and leave breathing room in a musical piece.

So just as much as he can show off his aggressive and highly energetic skills, by beating a specific musical theme into a bloody thumping pulp, he is also able to play with groove and swing, resulting in a sonic equivalent of grace and poetry, which makes him stand out in the crowd.

Fasciani can bring complex bass riffs, and an extensive knowledge of technique and tone manipulation to the table, certifying him as a powerhouse bass player. Playing in various ensembles also allows him to continue to blur the lines of musical genre in favor of creative exploration. Roberto Fasciani exhibits every kind of bass-playing skill a listener could want; keep a lookout for him on his YOUTUBE channel and follow him on FACEBOOK!

Jay Elle: “Rising Tide” is full of heart and soul!

Dondi: “Enough For Two” – an ever-talented voice and heartfelt message