Alternative rock artist, Ravi Amruth composed the songs “Mayday / Dreams ” together, with the intentions of having them played in combination. The songs represent almost...

Alternative rock artist, Ravi Amruth composed the songs “Mayday [Astro-Naught I] / Dreams [Astro-Naught II]” together, with the intentions of having them played in combination. The songs represent almost a yin and yang of a theme – acoustic vs. electric; Dashboard Confessional vs. My Chemical Romance; or as Ravi himself explains it: From melancholy to soulful, heartbreaking to heavy. It’s fascinating to imagine the bedroom of a teenage Ravi Amruth. The posters of Bowie and Queen fighting for wall space with Simon & Garfunkel and Jack Johnson.

But opposites attract, and often go together brilliantly. With an ear for the epic, an eye for the dramatic, and a heart for storytelling, Ravi Amruth is rewriting the rock n’ roll handbook, as he stitches together lines like “Wrapped inside the pitch black sky, I pray the night’ll catch your eye,” or “Pick a star give it your name, Though your eyes put it to shame,” from MAYDAY [Astro-Naught I]. 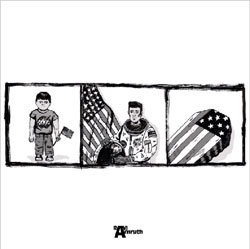 And again, “Jimmy’s just turning six now, Still waits for daddy to come back home, I say you’re waiting for him in the sky, But he still doesn’t quite get why,” from DREAMS [Astro-Naught II].

Ravi Amruth has outgrown both the stereotype and the facelessness of many contemporaries. Ravi speaks through imagery and metaphor in emotive tongues, and his amps are turned up loud as bathes his soulful vocals in distortion and passion.

However, let’s not forget that for every essence of the sinister lurking within, such as the deceptive electric guitar riffs which drives “DREAMS [Astro-Naught II]”, Amruth balances it with an equal amount of sweet, disarming acoustic coo on “MAYDAY [Astro-Naught I]”.

The songs are the recipients of a remarkable metamorphosis, as the varying pace and tones, as well as the deep lyrics are enough to keep you captivated throughout the whole two-song set. Ravi Amruth’s fertile imagination, gives his music an extra dimension lacking in other artists.

His lyrical talent is to infinity and beyond, while his raw and visceral vocal delivery shows no fear of limits either. If you’re into guitar-driven punk, rock, emo, or anything alternative, you’ll probably end up with this double track set at the top of your list of “accessible and epic rock” of the 21st century!

Sismo: “We Crash And Burn” – set to take the electronic stage by storm!