G-Ree Musik was born in Kosciusko MS, but moved to TX, and is head set on grinding his way out of poverty. His latest project is a 6-track collection...

G-Ree Musik was born in Kosciusko MS, but moved to TX, and is head set on grinding his way out of poverty. His latest project is a 6-track collection entitled “The Unexpected”, in which the Mississippi based rapper teamed up with #Nervedj @djpunch317. These half dozen high octane songs pump a medley of incendiary rap verses straight into the listener’s pulsating psyche. Whether it’s putting fire on everything with “For Sale” or denouncing social-political issues on “Dear Mr. President” and telling haters off on “Hate On Me”, each song brings a suitable amount of bravado and confidence that is ultimately deserved. 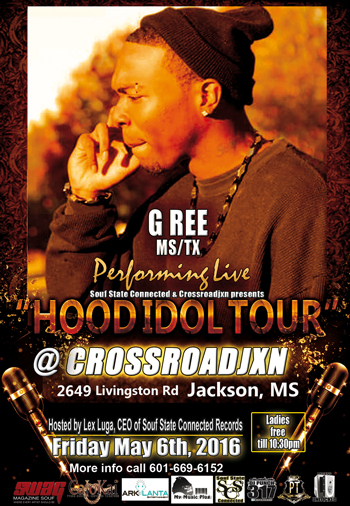 “Meditate” is where G-Ree Musik’s strangely vulnerable side comes out to play. And here he excels at expressing himself from a more human, romantic perspective and there is no exception here.

The finger-snapping R&B beat sets the warm tones with an age-old themed chorus just for the ladies sung beautifully by Fred Nice, on which G-Ree takes the song to an even deeper level with his heartfelt lyrical finesse.

The bottom line is that G-Ree Musik is fairly different from the many other rappers you have ever heard before. Whether it’s in lyrical themes, beats, flow, or vocal approach, G-Ree always has something in every aspect that makes him unique whether you like it or not.

Though only six songs long, “The Unexpected” is full of variety. Every song is extremely distinct, and offers something unique in its own right. G-Ree’s rhyme and lyrical delivery is more than just effective; it’s what often what moves the song along.

Unlike most hip-hoppers and rappers in today’s music industry, G-Ree recalls the old days of ‘vocal aggression’ found in, for example, he Wu-Tang Clan – albeit different in a beat and rhyme delivery sense. A good example of this may be found on the track “Item 9”.

“The Unexpected” captivates when focusing on this aggressive vocal nature, and stands as a thrilling hip-hop album for it. Apart from his impressive delivery, much of the appeal in G-Ree’s music is in the lyrics themselves. Sure, they‘re often over-the-top or cocky, but they‘re also glittered with wit and is hard not to enjoy.

The album confirms G-Ree Musikìs ability to push the boundaries of what rap can sound like. The album, may give new listeners a reason to hop on board for the wild journey ahead but at the same time, he ensures his core fans are in it for the long haul.