RAH-1: “Let Me Show You feat. Teeny Barrino” – a skillful infusion of its elements

The Collective Music Group, based in Raleigh, North Carolina, and headed by Rasheed Myers, recently introduced the unsigned hip-hop artist, RAH-1, and announced the release of his new single...

The Collective Music Group, based in Raleigh, North Carolina, and headed by Rasheed Myers, recently introduced the unsigned hip-hop artist, RAH-1, and announced the release of his new single “Let Me Show You feat. Teeny Barrino”. The single is taken from RAH-1’s album “All My Life”. There’s a lot to say about the dissemination of rap culture away from whatever city or coast is currently hot and toward variously located artists who forge a sound based less on geography and more on personal aesthetic. 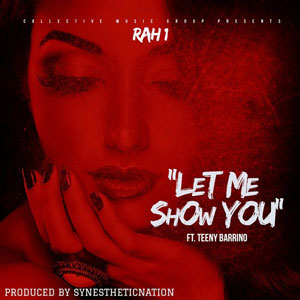 Raleigh rapper RAH-1 toes that line, sounding both uniquely like his zonal location and distinctly like himself at the same time. His new single defines itself by a skillful infusion of love for his grind and an appreciation of the frameworks of hip-hop. With this impressive release, RAH-1 stakes a claim for greater relevance both in his city and yours!

He has put together a profoundly self-aware and highly enjoyable effort. His mindset is evident right from the first bar and he obviously poured his full talent and resources onto this recording.

You have to give props to RAH-1, who keeps up smooth delivery almost syllable for syllable and showcases how malleable his flow can be over the right beat. He almost effortlessly rides the beat with astute wordplay. The guy can rap, and he knows it.

RAH-1 never puts himself in a situation where the production doesn’t complement him. Produced by the Synestheticnation beatmakers, the banger snaps from a bass-laden head-bobber to a groove freak-out, instilling itself as a slow-burning summer anthem for the city. Whether it relies on the rhymes, the vocal hooks, the flow, or the beat, this song never fails to resonate.

This is a strong statement from a fringe rapper in a major city, a guy who’s packed with potential and might just be another new rapper ready to make the same leap. Having Teeny Barrino on the track brings a tight melodic and soulful hook, and hearing these two on the same track gives the song a nice variety and really makes it clear that RAH-1 is a talent, plain and simple, yet neither plain nor simple.

He can hold his own with the best the underground has to offer. Keep an eye on RAH-1, because you might see him on your local train ride one day and on the charts the next.

BMe-F: “Reverie” – you get ingenuity on two levels!

Hirak Hemant Bhattarai: “A New Hope” – both challenging and interesting