King Woochi: “All Hail King Woochi 2” – his strongest most focused work in this series

Atlanta GA rapper King Woochi started rapping in 2005, and in 2006 he joined a group called the Southside Kingpins. In 2010 he formed another group called Floyd Rd...

Atlanta GA rapper King Woochi started rapping in 2005, and in 2006 he joined a group called the Southside Kingpins. In 2010 he formed another group called Floyd Rd Finest, before releasing his first solo project in 2015 entitled “All Hail King Woochi” which he followed up with the “All Hail King Woochi 1.5” EP in 2016. Now in 2017, he’s back with “All Hail King Woochi 2”. The ATL can add another project to its unprecedented run of phenomenal albums, while modern hip hop fans of the world will cringe at a track list with 12 songs that contains not one feature on any track. But it’s where this album shines brightest – using the lessons of hip-hop’s golden era as cautionary tales in 2017. The album reads like a love letter to rap’s glory days.

When you look at what King Woochi has accomplished on “All Hail King Woochi 2”, the album becomes even more impressive. He proves that he refuses to get categorized as a rapper who fails to adapt to hip hop’s constantly changing sound on the album’s first few impressive tracks ‘Bag [Prod. By Krissio]’, ‘Sonic [Prod. By Slaydre]’, and ‘Bobby Shmurda [Prod. By Krissio]’, while at the same keeping that old school lyrical feel alive throughout. The production also helps King Woochi create one of the most musically dense albums of his career. 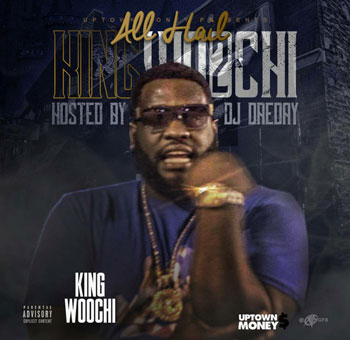 ‘What If [Prod. By Krissio]’ is driven by smooth piano keys that complement King Woochi’s gritty bars. On the track  ‘I’m Da King [Prod. By Ric & Thaddeus]’, King Woochi simply raps his ass off over some exhilarating synth strings.

There is no doubt that “All Hail King Woochi 2” is his strongest most focused work in this series. Lyrically and technically, King Woochi has a renewed focus, telling his story with more detail and meaning than ever. Never before has he made his beloved his tracks come to life like this.

When he’s not reflective, as on ‘Texas Pete’, his rapping is faster and intricately patterned; especially impressive in this sense is ‘Money Mitch’. It all makes for an immaculate space for King Woochi to do his thing, which he does with refreshing unpredictability – surprising all, with eclectic tracks such ‘Miami [Prod. By Chinaboy]’, and particularly ‘Can’t Stop [Prod. By Zaytoven]’.

What can you say, his lyrical content is pretty consistent, as he keeps it real while keeping it intriguing. If you want a rapper who’s talking about something, this is the man. You can tell that King Woochi was incredibly motivated for every single rhyme on this album

The beats/production are on par with the brilliant lyricism and come together to make this a great listening experience. Overall, King Woochi created a concise, focused, and intelligent album that follows a thematic concept. This concept displays his maturity and as result keeps him relevant and a valuable asset in the underground hip-hop community.