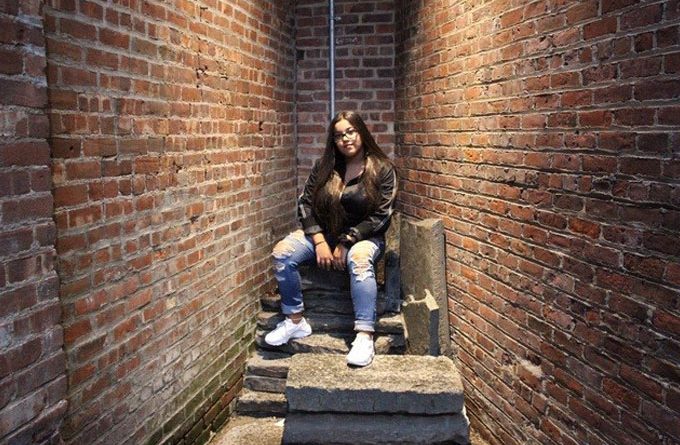 LOS ANGELES, CA – Long Island, New York is home to 16-year-old singer Alyssa Colón. Since beginning her musical journey at age three, Alyssa has never stopped singing to her own beat. When asked about the inspiration behind her decision to pursue a musical career, Alyssa reflects on her relationship with late grandfather. A true musician himself, her grandfather would often play guitar, and eventually taught Alyssa how to sing along. This special bond is significant in Alyssa’s career, as it paved the way for her future in music.

As Alyssa’s grandfather continued to coach her, she began to learn the fabric of her own sound. “I continued to grow as a singer, and it made me want to do music,” said Alyssa. As she kept perfecting her craft, she also ventured into playing instruments, specifically with piano. This is a true reflection of the artist’s commitment to exceeding any boundaries, as the singer does not believe in limiting herself in her career. “Music means so much to me,” said Alyssa. “So many of my favorite artists, like Ariana Grande and Justin Bieber, have impact on their fans through their words, and I want to put that kind of impact on others.” The 16-year-old makes it her mission to be somebody in this industry that fans and listeners can relate to and rely on for support. Through spreading light and positivity, she continues to do just that. After her recent release of “Because of You” and “Blocking You”, she has been busy getting ready to release more music from her repertoire. Before the release of the single, Alyssa admits she had feelings of apprehension and nervousness, much like other artists, as she thought people might react in an unfavorable way. However, this was far from the case. “After the release, I received so much positive feedback. The song brought almost 8,000 hits on SoundCloud in the first week, and it was amazing to receive so many good comments and positive feedback,” said Alyssa. Seeing all of her hard work come to fruition was so surreal, and further inspired her to keep moving forward. She is planning to release her next single, “Sportyrich”, in addition to her upcoming project, “I’m Gucci”.

Looking to the future, the singer hopes to put a lasting impact on people who come across her music. She plans to go the extra mile to inspire people in the process, and do so much more than merely releasing music just to do so. “I love music, and being an artist in general. Putting out music is a different story, and though I plan to do that, I also want to help people,” said Alyssa. Through the positive message delivered through her meaningful lyrics, she hopes to brighten up someone’s day, day in and day out. Whether it is on tour or at a stop along the way, Alyssa’s desire is for her fans to feel comfortable relying on her through life experiences. Her musical style, which includes pop mixed with an RnB feel, is extremely versatile. Her overall artistic persona is something that sets her apart from the rest. “My music is going to be different,” said Alyssa. “I want to do a mix of things that other artists aren’t currently doing. I want to bring back the RnB vibe, and I feel I can do that with my voice and style of music.” There are major things in the work for this talented singer, and the sky is the absolute limit.

Follow Alyssa Colón on her social media sites below:

David Vaters: “A Voice In The Wilderness Volume 2” – baring his soul