Derek Homer: “Reborn” – smooth on the soul, easy on the ear

Born to Trinidadian parents, Derek Homer was raised in a Christian home attending and serving in his local church as a young boy. Derek was introduced to music at...

Born to Trinidadian parents, Derek Homer was raised in a Christian home attending and serving in his local church as a young boy. Derek was introduced to music at an early age by his father’s involvement in the Notting Hill Carnival. He started playing the piano at the age of six, and successfully won a scholarship to attend music school at ten, finally graduating from university with a Bachelor of Music Performance and Composition. Though remaining involved in the Notting Hill Carnival, scoring and arranging music for local and international artists, Derek had followed a career in the IT industry. In 2006 though, he was hugely impacted by the depth and passion of the music and worship he discovered at the Hillsong Church London. After serving as a volunteer he later joined their worship team as a piano/keyboard player, and subsequently started writing songs dedicated to his passion for faith and worship.

It’s not an exaggeration to say that Derek Homer’s latest single “Reborn” is a great, easy-listening pop tune.  Despite how popularity polls would re-arrange the pecking order, Derek stands near the top of the heap among the talented modern worship songwriters. 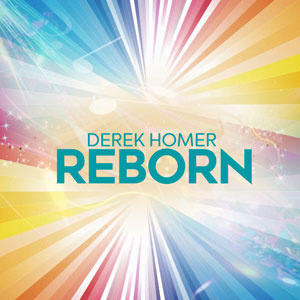 I do not know whether this song will receive widespread acceptance and usage, because a song’s rise to popularity usually happens for reasons other than quality.  But compared to a lot of what his indie contemporaries are releasing, the production on “Reborn” seems more refined, and the songwriting has an added depth, no doubt due to Derek Homer’s ever-deepening love of Scripture.

One of the chief questions I ask when reviewing a worship song is, “Does it move me?”  Subjective as it sounds, it is a necessary condition for a great worship record, I think.  “Reborn” moves me.  It joyfully stirs up the seat of my affections, though I am not reborn or a Christian, in the truest sense of the word, myself.

There is a simplicity and accessibility to Derek’s melody-writing, which means his music is singable and engaging.  Being in a familiar pop format, the song has the ability to absorb all of your attention. Furthermore “Reborn” is well-engineered and flows smoothly from top to bottom.  Textually, the track has a God-ward trajectory and is gospel-saturated.

Again, in worship songs—and music in general—it’s the little things that make a great song. The stops, the riffs, the pulse of the drum solo. Even the intensity or frailty of the singer’s voice can change the course of a song and make it great or average.

Derek Homer makes just enough right moves to take his style to the next level. Derek’s music is truly simple and easy on the ear. And in his newest single “Reborn” he gives us testimony of his personal experiences with faith and worship, which is always a good way to nourish the Christian heart and spirit.

Jenn Connor: “Like I Did” – a kind of feline sensibility